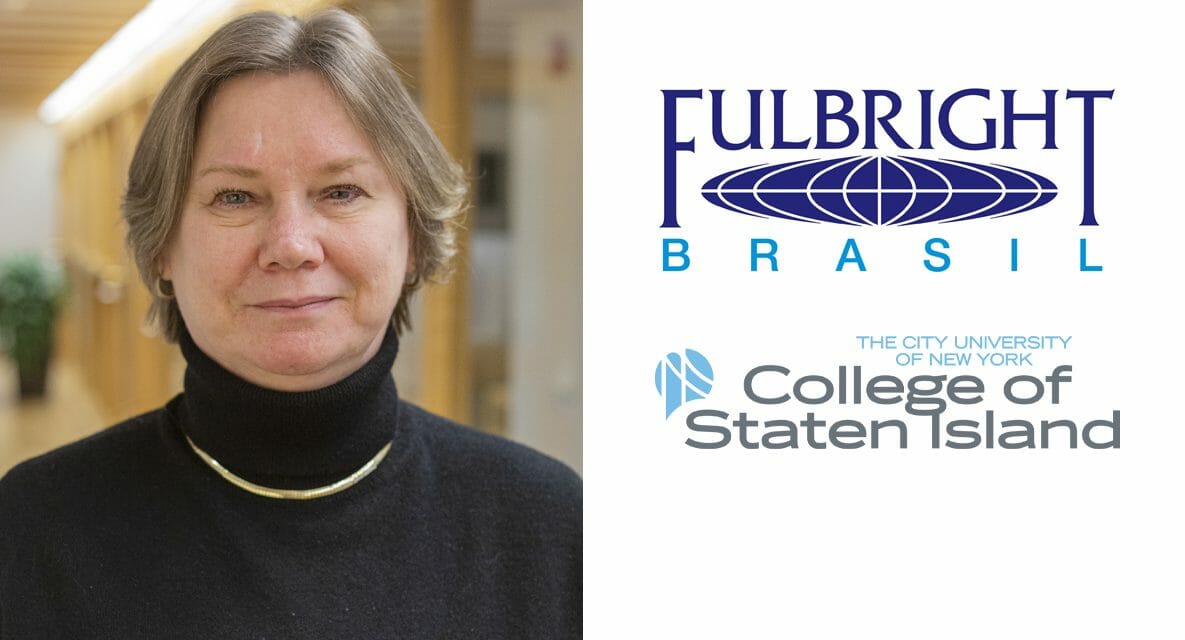 The College of Staten Island is pleased to announce that Dr. Irina Sekerina has received a Fulbright U.S. Scholar Program award in Brazil for the 2022-2023 academic year from the U.S. Department of State and the Fulbright Foreign Scholarship Board.

The goal of Dr. Sekerina’s three-month Fulbright research project is to work with Russian-Brazilian Portuguese elderly speakers in São Paulo, Brazil, to identify what allowed them to preserve their heritage Russian although they never visited Russia. This project is a part of a Brazilian Portuguese-Russian Corpus for which data collection started in 2021. Her research will focus on three linguistic topics: (a) grammatical gender, (b) prosodic characteristics, and (c) narrative competence.

“My new Fulbright award to Brazil is the second one in my career (the first Fulbright award was to Norway in 2016). I am very excited to be able to go to Brazil and meet in-person our 30 super-agers. Super-agers are people in their 70s or 80s who have cognitive function equal to that of people decades younger. We have been talking to them on ZoomTM for two years. Now thanks to Fulbright, my Brazilian colleagues and I can find out from “the horse’s mouth” the secrets of how their engagement with the heritage Russian helps them defy wear and tear of cognitive decline in aging.”

Currently, there are approximately 1,500 Russian speakers in São Paulo. Most are second-generation, whose parents immigrated from Russia to escape persecution during the Bolshevik Revolution. Many of these speakers, now all nearly 80 years or older, speak Russian as a native would have when they emigrated from Russia, without the changes that have occurred in Russian over the past seven decades. Typically, the “native” tongue would have degraded rather quickly but not among this population despite its small size and living in a non-Russian-speaking community. As second-generation, this group are considered to be native speakers of both Russian and Portuguese.

According to Dr. Sekerina, “The Russian has essentially been ‘frozen’ since 1950 in this population, whereas there have been massive changes in Russian spoken in Russia.” What makes Dr. Sekerina’s research unique is that the researchers can use this community to learn more about how the heritage language survives when isolated from the country where it is the societal language. This is in contrast to the typical second language learner who is learning a foreign language in the classroom.

Dr. Sekerina is among more than 800 U.S. citizens who will conduct research and/or teach abroad for the 2022-2023 academic year through the Fulbright U.S. Scholar Program. Fulbrighters engage in cutting-edge research and expand their professional networks, often continuing research collaborations started abroad and laying the groundwork for forging future partnerships between institutions. Upon returning to their home countries, institutions, labs, and classrooms, they share their stories and often become active supporters of international exchange, inviting foreign scholars to campus and encouraging colleagues and students to go abroad. As Fulbright Scholar alumni, their careers are enriched by joining a network of thousands of esteemed scholars, many of whom are leaders in their fields. Fulbright alumni include 61 Nobel Prize laureates, 89 Pulitzer Prize recipients, and 40 who have served as a head of state or government.

The Fulbright Program is the U.S. government’s flagship international educational exchange program and is supported by the people of the United States and partner countries around the world. The Fulbright Program is funded through an annual appropriation made by the U.S. Congress to the U.S. Department of State’s Bureau of Educational and Cultural Affairs. Participating governments and host institutions, corporations, and foundations around the world also provide direct and indirect support to the Program.

For more than 75 years, the Fulbright Program has provided more than 400,000 participants—chosen for their academic merit and leadership potential—with the opportunity to exchange ideas and contribute to finding solutions to challenges facing our communities and our world. More than 800 U.S. scholars, artists, and professionals from all backgrounds teach or conduct research overseas through the Fulbright U.S. Scholar Program annually. Additionally, over 1,900 diverse U.S. students, artists, and early-career professionals in more than 100 different fields of study receive Fulbright U.S. Student Program grants annually to study, teach English, and conduct research overseas.

In the United States, the Institute of International Education supports the implementation of the Fulbright U.S. Student and Scholar Programs on behalf of the U.S. Department of State, including conducting an annual competition for the scholarships.

For more information about the Fulbright Program, visit http://eca.state.gov/fulbright.

Staying Safe and Healthy on Campus This Fall a Priority