The College of Staten Island men’s baseball squad completed a three-game set with City College of New York this afternoon, taking a doubleheader by scores of 6-2 and 20-4 in a doubleheader played earlier today at the CSI Baseball Complex.  Game one of the twinbill was a make-up from Saturday’s game two rainout.  The seven-inning affair saw CSI serve as the visiting team, and counted towards the CUNYAC standings.  The second game, a nine-inning affair, was a CSI home contest, not counting towards the CUNYAC ledger.  CSI improved to 17-13 overall and 7-1 in the CUNYAC, while the Beavers fell to 6-23, 3-5, respectively.

CSI took a 3-0 advantage after an inning and a half thanks to an RBI-single by Pat Game in the first, scoring Bryan Moreno, and a Dan Lynch sac fly and Moreno RBI-double in the second frame.  CCNY edged closer by plating two runs in their turn of the second frame.  Chris Lounsbury posted a sac fly of his own, and a passed ball allowed Paul Rojas to score.  With the bases loaded, however, Tingos got CCNY’s Michael D’Agnese to fly out, ending what could have been a rougher inning.

Up by one, CSI got the insurance it needed an inning later when they plated two runs without the benefits of a hit.  After back-to-back walks issued by McCool, CSI’s Joe Cassano laid down a sac bunt, which McCool fielded and threw over the head of his first baseman, allowing two runs to come home as Cassano rounded all the way to third base.  CSI added another digit in the fourth, when Moreno came around on a wild pitch after starting the inning with an infield single.

Tingos settled from there, allowing only two baserunners after the third inning to get the win.

After the tough, hard-fought, game one win, CSI posted a laugher in the second game, as the Dolphins blitzed five CCNY pitchers to the tune of 20 runs (16 earned) on 18 hits, aided by four Beavers errors.  Mark Glennerster, Sal Todaro, Moreno, and Henry Roman all posted RBI-hits in the second inning to stake CSI to a 4-0 lead early, and then CSI unleashed a hit-parade in the third inning, plating 9 runs on seven hits, highlighted by a Joey Falcone triple and Glennerster RBI-double.  Bases-loaded RBI walks were also issued to Roman and Gale as CCNY starter Dave Titor was chased.

CSI added single runs in the fourth and sixth innings, and Falcone’s second triple of the game highlighted a five-run eighth inning, as the Dolphins continued to pad the lead.  The insurance was more than enough for CSI starter James Mardikos, who managed a win after tossing six innings, allowing four earned on five hits, with five walks and six strikeouts.  Chris Matusiewicz, Matthew Schwartz, and Daniel Slevin each pitched one inning of scoreless relief.  CCNY pitchers were victimized by 12 walks in the contest.

At the plate, senior Mark Glennerster was the hero, as the third-baseman tied a school-record by scattering six hits, tying Jason Anarumo (1994) and teammate Pat Gale (2010) as the only Dolphins to complete the feat.  Falcone’s two triples in the same game is also a record, occurring for only the 19th time in team history.

With a 7-1 CUNYAC record, the Dolphins control their own destiny in the race for the CUNYAC crown.  They lead Baruch College by one game in the standings, and they face Baruch this coming Saturday in a doubleheader to conclude CUNYAC play.  CSI will return to action at the CSI Baseball Complex tomorrow night, when they host Old Westbury at 7:00pm in a single contest. 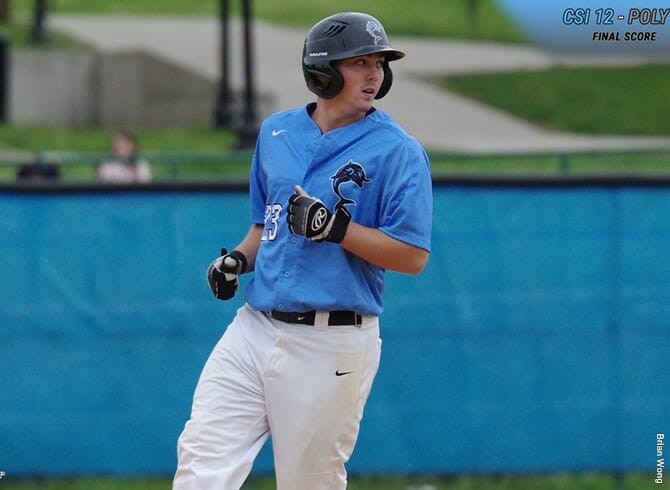