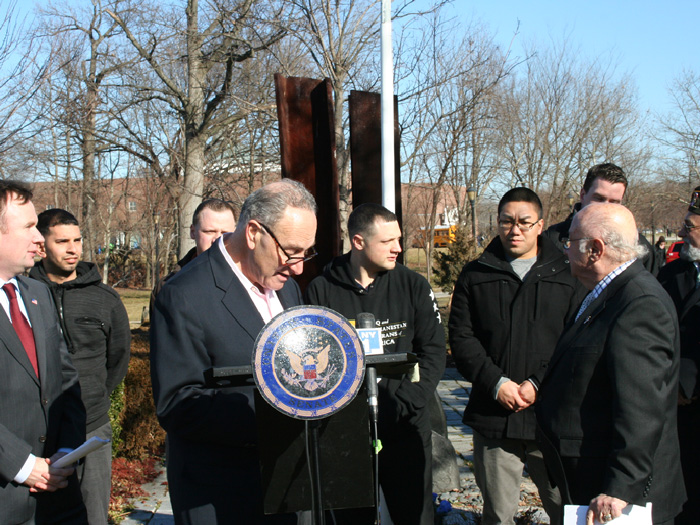 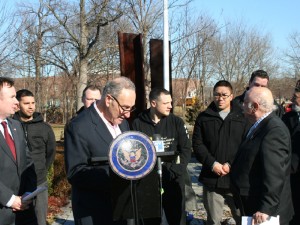 Student veterans join Michael Cusick, Charles Schumer, and James Molinaro at a recent press conference at the CSI WTC Memorial Garden in support of increasing the Department of Veterans Affairs’ Basic Allowance for Housing that currently provides active duty personnel living on Staten Island and veterans attending college on Staten Island with thousands of dollars less compared to the other four boroughs of New York City.

The Veterans Educational Transition Services (V.E.T.S.), as well as the CSI Student Veteran Center, has always worked to serve CSI’s student veterans by offering them guidance in transitioning to college student life. What is not well known about the group that is working so tirelessly to aid incoming veterans is that the men who make up the V.E.T.S. team are veterans themselves.

The CSI Student Veteran Center has earned much nationwide praise for its ability to help veterans due to the fact that the veterans are being aided by people who know full well how difficult the transition to student life can be. “Being in the military is obviously stressful and dangerous,” said Joseph DiMarco, a member of the V.E.T.S team and former Marine.  “Many of these incoming veterans look forward to being “normal” college students.”

One of the factors that have made CSI a “Top Military Friendly School” three years running is its willingness to work with incoming vets struggling to assimilate to college life. “The collaborative efforts of the V.E.T.S. facilitate a smooth transition from military to student life for veterans and their families by providing a strong support system and centralized “vet-friendly” services on campus,” said Vito Zajda, Deputy Registrar at CSI.

One way that CSI aids veterans is by instituting “Life Credits” for certain subjects. For example, many physical education requirements are waved for veteran students because since they are military veterans, they have already successfully completed boot camp. “The departments are behind us,” said V.E.T.S. team member Christopher Longo (Army National Guard). “That sort of support is key when working with veteran students.”

As a result of this campus-wide support and the efforts of the V.E.T.S. team, Senator Charles S. Schumer recently held an event in front of the 9/11 memorial  at CSI offering support for Staten Island vets and calling for the Department of Defense (DOD) and the Department of Veterans Affairs (VA) to revise their Basic Allowance for Housing (BAH) regulations that currently provide active duty personnel living on Staten Island and veterans attending college on Staten Island with thousands of dollars less in housing than those in the other four boroughs of New York City.

“Our job as elected officials is to honor these vets,” said Senator Schumer. “S.I. vets and soldiers risked everything for their country and they deserve equal support.”

CSI President Tomás D. Morales, who had been writing the DOD about the issue, was encouraged by the Senator’s remarks, saying “I believe the DOD officials will do the right thing.”

For their part, the CSI V.E.T.S. team has never wavered in their support for continuing the CSI tradition of assisting incoming vets by offering assistance in anything from filling out application forms to offering books and laptops to veteran students who need them. “We know how tough the transition can be since we’re vets ourselves,” said David Colon, a V.E.T.S. team member and retired member of the Coast Guard. “The current BAH hurts all of us because vets are forced to work two to three jobs to make ends meet or not come here (CSI) at all.”

The three V.E.T.S. team members all share a passion,  not only their fellow veteran students, but for CSI, as well. “CSI has given us a lot to work with,” said Colon. “The campus’ willingness to work with vets is unequaled,” adding that “CSI is a great institution. It is part of the life blood of Staten Island.”

CSI has progressed so far in its assistance of veteran students that the Veteran’s Center at CSI is currently serving as a model for other veteran centers across the country.

The conjunction of the V.E.T.S. team members’ passion and the College’s willingness to work with the vets has made CSI one of the top schools for helping military personnel transition to civilian life; so much so that even Senator Schumer commented on this.

Zajda adds that “the veterans services CSI provides could not be possible without the continued support of Dr. Morales, Student Affairs, Academic Affairs, and the entire College community.”

Management on Ice: Experiential Learning at the Barclays Center