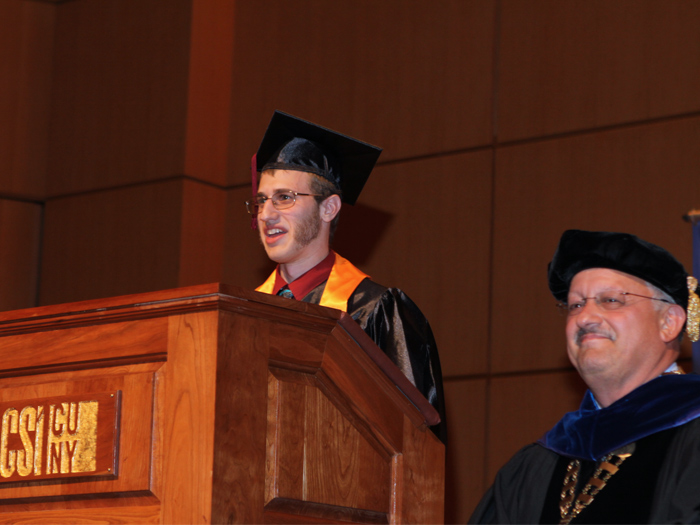 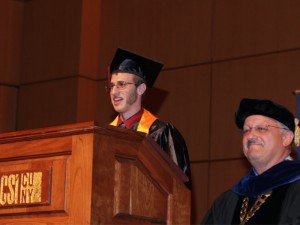 College of Staten Island Salutatorian Daniel Feldman plans to begin studying astronomy at Boston University as a PhD student in the fall. He is a Physics major and part of the 2012 graduating class of the CUNY Macaulay Honors College at CSI.

The College of Staten Island recently honored its top students, with the help of their friends and families,  at the Fifth Annual Honors Convocation, which was held in the Center for the Arts Concert Hall.  The event’s emcee was Dr. A. Ramona Brown, CSI Vice President for Student Affairs.

In his remarks, Feldman shared the highlights of his CSI experience with the audience, “I’ve had a lot of great experiences at the College of Staten Island—thanks to Professors Charles Liu, Irving Robbins, and Emily Rice, I’ve completed a number of research projects in Astronomy…tracking asteroids, classifying the shapes of far-away galaxies, and uncovering the hidden properties of failed stars. With the help of CSI’s Career and Scholarship Center, especially Dr. Geoff Hempill, I’ve won awards and secured research internships at Hunter College and Northern Arizona University. I received guidance from the Macaulay Honors College staff, namely Dr. Deborah Popper, Anita Romano, and especially Lisa French, who somehow got me through a semester of 23 credits at three campuses.”

Feldman, one of approximately 850 students graduating with honors from among 85 different majors, humbly addressed his success and that of his peers in his speech. “Coined by Pauline and Suzanne Imes in 1978, the Imposter Syndrome is a phenomenon in which people are unable to believe they deserve the success they have achieved,” said Feldman. He went on to explain that many successful people suffer from this syndrome, many of them most likely in attendance at the Honors Convocation, but that they should all be viewing the awards ceremony as “proof that you are not an imposter…your attendance here is a testament to your success.”

After the student address, Dr. Brown presented the Student Dolphin Award to Meagan Derbyshire, who called receiving the award “a great honor.” Derbyshire, who plans on pursuing a career in global medicine, also felt that the Honors Convocation validated the efforts of the CSI faculty and staff because by honoring the highest-achieving students, the campus also “honors the people who help the students.”

Dr. Vess, highlighted the importance of holding an Honors Convocation when she told the attendees, “events such as this remind us of the wonderful work done by students and faculty and of all the ways in which CSI continues to fulfill its mission.”

The honored students, their families and friends, faculty, and staff attended a dessert reception in the Atrium following Dr. Brown’s closing address, where they shared stories of their time at CSI, celebrated their accomplishments, and set their sights on the future.

President Morales Recommended for Another Three-Year Term at AASCU