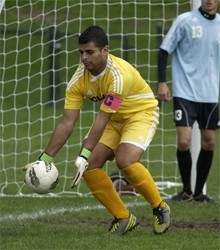 The game was played largely at midfield with great scoring chances coming few and far between, but CSI made the most of one in the 22nd minute, and then made it stand up the rest of the way.

Bard (2-10-2) had the best chance early, but Christian Letourneau’s direct kick from 30 yards hit the crossbar.

Later, a hard cross from the right wing by senior Lirim Begai got through Bard keeper Gabe Rudd and trickled behind him, right in front of the goal mouth, where Nedgy Nazon was waiting. Nazon tapped it in, and the Dolphins had a 1-0 lead.

The second half was similar, although Bard did press forward late to no avail. Ahmed El-Gahrieb made four saves for the Dolphins, 8-7. CSI’s next game is on Wednesday against CUNYAC foe CCNY.

The Dolphins will play CCNY on Wednesday at 3:00 pm.