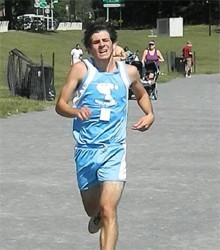 Both the College of Staten Island men’s and women’s cross-country squads will be taking their best efforts to Van Cortlandt Park, in the Bronx, New York, on Sunday, as part of the CUNYAC Cross-Country Postseason Championship Meet.  The women’s 6k event is set to go off at 9:30am, while the men’s 8k race will begin at 10:30am.  High hopes surround both programs heading in, as the Dolphins will look to contend for individual medals as well as team accolades.

Making the biggest strides this year will be the men’s side, which finished last year in 7th place.  Consistency has been the name of the game for the Dolphins, as most every runner has sown a steady improvement in race times throughout the course of the year.  CSI collected a pair of second place finishes (York Invitational, Brooklyn Dual), and have a shown a presence near the top of the race times each week.

“I believe we will have the best showing at a CUNY Championship meet in the program’s short history,” said Head Coach Robert Russo.  “There is great team synergy among the athletes which has helped the overall team effort and improved their individual performances, and we are ready for the big stage this Sunday.”

Leading the charge for the men has been Andrew Pate, a sophomore who has registered five of CSI’s Top-10 times in 8k events this season, including a 29:49.10 time at the York Invitational on October 7, CSI’s best time in the 8k all year.  Nipping at his heels in recent weeks is teammate Samuel Obesanya, who has shaved over two minutes off his 8k over the course of the season, topping out at 29:49.68.  A late arrival at CSI, Keith Grossman posted a personal best 29:45.00 time two weeks ago at the Brooklyn College dual meet, and should figure in amongst the head of the class.

“Our men’s side has both surprised the competition and proven themselves as a serious competitor within CUNY.  I expect out top runners to place really well in their last visit to Van Cortlandt Park.  They have found a great balance of racing each other and working together to race their competition.”

Following our top timers will be a young, rookie squad that should help secure a potential top three team score.  We are very excited about the race.”

On the women’s ledger, CSI has also shown the same improvement, and will look to build on their 4th place finish of a year ago.  Great flashes have been shown by the small cluster of runners, all improving towards the second half of the season, right on time for the CUNYAC Championship.  CSI’s top time this season was posted by Victoria Barry at the York Invitational, as the frosh crossed in at a time of 29:12.  She was followed closely behind by Jacqueline Jamaleddine, who came in at 29:48 in that race, and although she didn’t compete at York, sophomore Joanna Villegas did well to impress the following week with a time of 29:55.

“We had a rocky start of the season but have been training well and work great together when racing.  I expect to see great teamwork between Victoria, Joanna, and Jackie as they push each other toward potential top 15 finishes,” Russo stated.  “The 4th and 5th scoring spots will be a competition within the race as Kubra, Ayat, and Sandra, who have been trading finishing places all season, battle for those spots.  Between their training, teamwork and great attitudes toward the sport, these two teams will be used for comparison by future CSI cross-country athletes, and that has us really looking forward to the meet.”

CSI will still have a final meet even after the CUNYAC’s, participating in the NJIT Halloween Classic on November 4 at Van Cortlandt Park.  Many of CSI’s runners also compete in CSI’s club track and field program, which gets underway this winter.