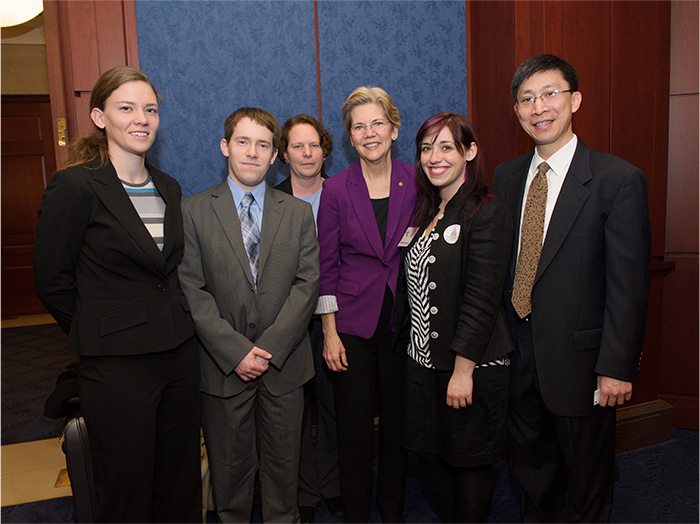 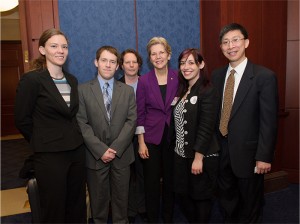 Fifteen members of the American Astronomical Society (AAS) traveled to Washington, DC to express the need for sustained and predictable federal funding of research and development (R&D) programs — including NASA, NSF, and the Department of Energy — which are critically important to American economic growth.

The AAS delegation was part of a group of more than 200 scientists, engineers, and business leaders who converged on Capitol Hill for the 18th annual Congressional Visits Day (CVD), held March 12-13 and sponsored by the Science-Engineering-Technology Work Group. CVD is coordinated by coalitions of companies, professional societies, and educational institutions whose members feel strongly that science and technology comprise the cornerstone of our nation’s future.

“We had a strong turnout this year and more volunteers than we could accommodate,” notes Dr. Joel Parriott, the AAS’s Director of Public Policy. “This reflects the American astronomical community’s deep appreciation of the federal government’s support for what we do. We also had a high percentage of early-career participants, which bodes well for the future of our community and isn’t surprising since the current climate of fiscal uncertainty presents special concerns for scientists just completing their studies and launching their careers.”

While visiting with their representatives and staffers, CVD participants discussed the importance of the astronomical sciences and the nation’s broad portfolio of investments in science, engineering, and technology to promoting prosperity and innovation. Most importantly, they provided a constituent perspective on the local and national impact of these programs and their significance to virtually every region of the country.

“It’s more important than ever for scientists to reach out to policy makers,” says Dr. Kevin B. Marvel, the AAS’s Executive Officer. “With the astrophysics, planetary-science, and heliophysics decadal surveys in hand, we need to communicate our community’s prioritized goals to lawmakers. Congressional Visits Day, which we participate in every year, helps us train our members to be effective advocates for science.” The decadal surveys, which astronomers have been doing since the 1960s, represent the consensus of researchers’ review of the current state of scientific understanding and include prioritized lists of ground- and space-based projects needed to address outstanding questions over the coming decade. Funding agencies and policy makers look to these reports for guidance on scientific priorities.

Over the last two years the AAS has intensified its efforts to make the case for federal science funding with a program called Communicating With Washington. “We aim to have one or two astronomers visit Capitol Hill every week that Congress is in session,” says Marvel. “We hope to reach every senator’s and representative’s office, every House and Senate science committee, and the White House.”

More than 50 percent of all industrial innovation and growth in the United States since World War II can be attributed to advances pioneered through scientific research, with publicly funded R&D the vital foundation for today’s scientific and technological progress. Achievements from federally funded science, engineering and technology include global environmental monitoring, lasers, liquid crystal displays, the Internet, among many other scientific and technical advances.

The federal government supports a unique research and education enterprise that fuels the American economy. This enterprise provides the underpinning of high-technology industries and expands the frontiers of knowledge in every field of science. Much of this research is carried out at academic institutions across the country ensuring knowledge transfer to future generations of scientists, engineers, mathematicians, physicians and teachers. Additionally, technology transfer from academic research adds billions of dollars to the economy each year and supports tens of thousands of jobs.

More information about the AAS Communicating With Washington program:
http://aas.org/cww

The American Astronomical Society (AAS), established in 1899 and based in Washington, DC, is the major organization of professional astronomers in North America. Its membership of about 7,500 also includes physicists, mathematicians, geologists, engineers, and others whose research interests lie within the broad spectrum of subjects now comprising contemporary astronomy. The mission of the AAS is to enhance and share humanity’s scientific understanding of the universe.