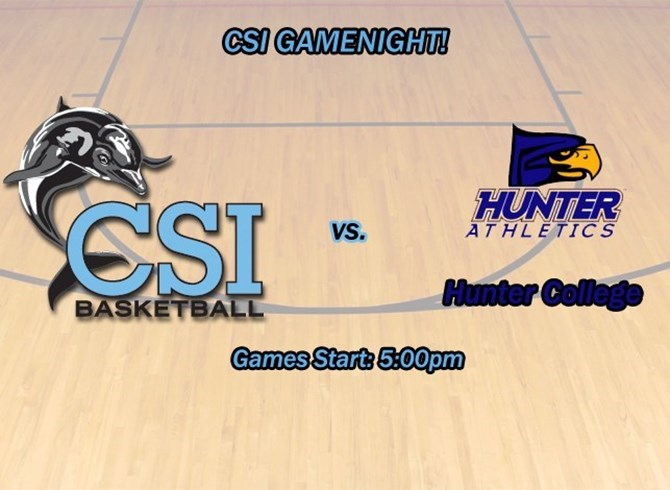 The College of Staten Island men’s and women’s basketball teams will take to the road tonight to face off against the Hawks of Hunter College in a CUNYAC show down. Both Dolphins teams have been very impressive this season as the men are 11-2 overall and undefeated in the CUNYAC. The women are 12-3 overall and are also undefeated in the CUNYAC. Both the Dolphins teams sit atop their conference and will not look to relinquish that spot.

The men are having an outstanding season and their record shows it. The Dolphins are on a 10 game winning streak while outscoring their opponents by 14.5 points. Outscoring their opponents by that much has them ranked 33rd in the nation in scoring margin. Frankie Schettino is ranked 3rd in the nation in assists per game with 7.4 a game. Look out for Bloochy Magloire to light it up from three point range as he is averaging 15.2 points per game. Magloire is currently shooting 53.3% from beyond the arc which is good enough to be ranked 2nd in the country in three point percentage. Javon Cox will look to dominate the boards as he averages 8.2 rebounds and 14.1 points per game.

The women are also having a stellar season, and recently had a 1,000 point scorer in Katelyn Hepworth which she acquired last game against the Bloodhounds. The women are currently on a five game winning streak with four of their five wins coming in conference play. The Dolphins are ranked 30th in the nation in points per game as they average 77.6 points. Melanie Johnson will look to continue her scoring streak as she is averaging 16.5 points per game as well as 8.2 rebounds. Megan Myhre will do what she does best and shoot from beyond the arc as she is ranked 45th in the country by shooting 40%. Hepworth will like to add to 1,000 point title tonight against the Hawks by dominating the boards with 8.1 rebounds per game and 11.9 points.

The Hawks are coming off of a loss to Brooklyn College and will look to bounce back tonight against the Dolphins’ men’s team. The Hawks are sitting in sixth place with a record of 3-4 in the CUNYAC and 7-8 overall. If the Dolphins want to win tonight they will have to contain Frankie Drayton who is scoring 21.5 points per game and averaging 5.2 rebounds.

The Hawks women are also coming off of a loss to Brooklyn College and will hope to change their luck tonight against a strong Dolphins team. The Hawks have only won one of their last five games so a win tonight would make an impressive end to that streak. The women are also 3-4 in the CUNYAC and 6-10 overall. Nicole Lenard and Kristen Markoe will need to have an outstanding game tonight if they’re looking to change their luck. Lenard is averaging 16.4 points per game and Markoe is averaging 15.9 points and 9.9 rebounds per game. The Dolphins will have their hands full tonight with this duo and will need to do everything in their power to stop them from controlling the game.