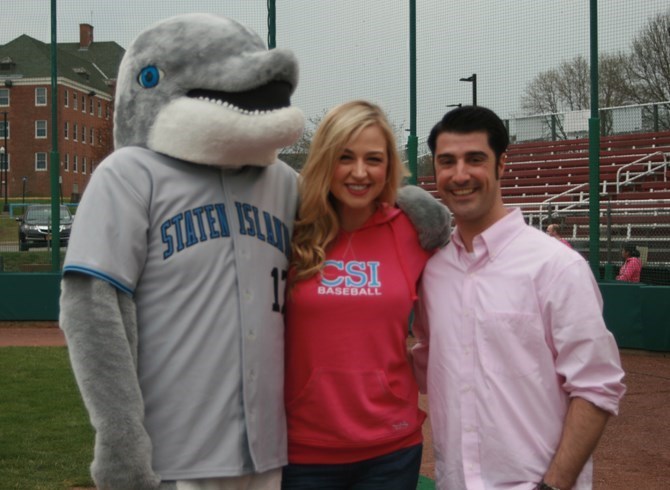 The College of Staten Island men’s baseball squad overturned a late deficit with a spirited rally to score a 7-4 win over Drew University as part of the 11th Annual Grace Hillery Breast Cancer Awareness Night at the Tomas D. Morales Baseball Field in Willowbrook. More important than the game, however, was the tally in the donation category, as the Dolphins raised a total of over $6,523 in funds to support CSI’s own Staten Island Breast Cancer Research Initiative.

The annual highlight to the baseball season at CSI is a tribute to Grace Hillery, mother to former Dolphin baseball star Anthony Hillery, who lost her battle with breast cancer in 2004. Fund-raising for the Staten Island Breast Cancer Research Initiative started early and never stopped at the ballpark, with money generated through T-shirt sales, raffles, 50/50, concessions, and straight donations. The money raised this year puts the overall total over the past 11 years at over $55,000.

The evening kicked off with introductions of several key figures, including Hillery and CSI President Dr. William Fritz, Director of Athletics Charles Gomes, CSI coaches Mike Mauro and Neil Barbella and members of the SIBCRI, led by Executive Director Donna Gerstle. They were joined by local celebrity Bethany Watson, the Co-host of the Elvis Duran and the Morning Show on Z100, 100.3FM.
The rousing introductions were followed by the kick-off donation, made by title sponsor One-on-One Rehabilitation Services in the amount of $1,000, presented by Joe Saraceno and Stephen Barth. Following the initiative, the game’s ceremonial first pitch was offered by both Mrs. Janet Sorrentino and Watson, who both threw perfect strikes to get the game started. A breast cancer survivor, Sorrentino has been in remission since 2013, and works side-by-side with members of the One-on-One team with her recovery.

On the field of play, the teams were locked in a pitcher’s duel for the first five frames as CSI’s Josh Bernstein locked horns with Drew’s Ryan Fitzpatrick.

CSI would chase Fitzpatrick in the sixth frame, scoring a pair of runs off of a DU error and passed ball to take a 3-1 lead. It was short lived, however, as the Rangers responded for three runs in their turn of the seventh. Jonathan Rodrigues notched a sac fly and Al Krause tallied an RBI-single off of CSI reliever Anthony Storz, helped along by a CSI fielding blunder.
Down 4-3, CSI battled back, scoring four runs in the eighth inning to take the commanding lead back in their favor. A pair of Drew errors aided the cause. Greg Manassa’s RBI-single would plate Joe Palmeri for what turned out to be the game-winning run. Jason Failla retired the Rangers in order in the 9th inning to preserve the win.

Win or lose, however, both teams were excited at the opportunity to take part in a higher calling, the charge to strike out breast cancer, one inning at a time.

“I am always overwhelmed by the dedication that both teams and the staff at the College of Staten Island have with this game,” said Hillery during his address. “There are so many people battling with this disease, but people like the ones we have collected here care enough to do something special each year and really bring this fight home.”

CSI skipper Michael Mauro agreed. “We love holding this game in Grace’s memory and for Anthony and his family to come back here and feel supported. It’s a great cause surrounded by great people – from the team we play to the local celebrities to the everyday folks who just want to do something to help. It’s truly a great event.”

The over $6,500 in money raised in 2014 brings the overall tally to over $55,000 since the event was chartered eleven years ago, and CSI intends to grow the game each year. The amount raised included a $250 shot offered by Drew’s baseball squad, which turned over its meal money for the game to the effort, commemorated in a third-inning ceremony with Drew Athletic Director Jason Fein and Head Coach Brian Hirschberg.

CSI is next in action on Saturday, facing off against Baruch College in a doubleheader at the Tomas D. Morales Baseball Field at 12pm.