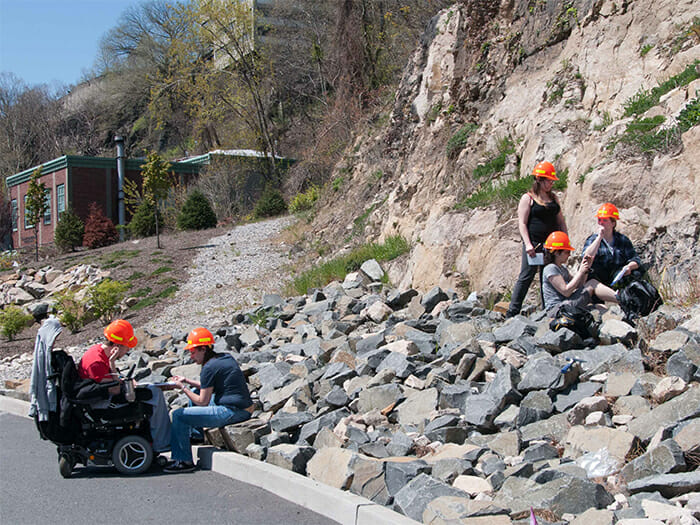 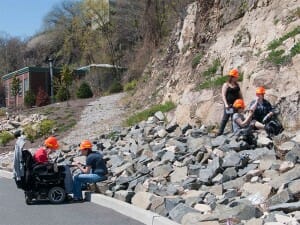 The College of Staten Island cultivates an atmosphere where scholarship is achieved both within the classroom and without.  Students discovered just what that means when they helped to discover an important geological find in Northern New Jersey this semester.

A few times per semester, Dr. Jane Alexander’s Sedimentology class take trips that allow them to study, in person, the same geological phenomena they read about in their textbooks. This is all done in the context of her classroom lectures; however, two of her students, Victoria Rivelli and Sean Thatcher, were so interested in what they found during the excursions that they volunteered time after class to join Dr. Alexander’s research team.

The research involved studying an outcrop of sedimentary rock in North Bergen, NJ that had been recently exposed and the group studied how the different structures had formed. The students logged their findings and discovered that the sedimentary rocks at the base of the Pallisades Sill may be from a different formation to the one that was previously identified, or as Dr. Alexander put it, “the map is not right.” 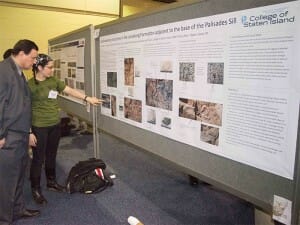 Other features in the rocks may not have been formed in the manner previously theorized. These are very interesting developments, especially for two undergraduate students who never planned on focusing on sedimentology at CSI. The discovery was so fascinating that Dr. Alexander and her students presented them at the recent Geological Society of America (GSA) conference.

“It was nerve wracking,” said Rivelli of presenting their poster to thousands of geologists from across the country. “Our poster ended up attracting a lot of attention. Dr. Alexander added that the group had “found simple but interesting things. The Palisades Sill is such a landmark now due to our field trip; other Professors want to take their students to the site.”

The current findings only served to prove that more information about the site needs to collected and Dr. Alexander has received a grant to further her and her students’ research of the site.

“In the future,” Dr. Alexander explained, “our work will include additional field sampling and logging of detailed transects through the metasedimentary rocks. These samples will be analyzed for major, trace, and rare-earth elements to ascertain changes resulting from the metamorphism. Thin sections will be made to allow an interpretation of mineralogical changes, and how these relate to the observed geochemistry. Sedimentary logs will be made as samples are collected in the field, so that it will be possible to separate variations due to metamorphism from sedimentological variation within the Lockatong and Stockton Formations, and to compare the sections where there has been sediment remobilization with those where there has not.”

Part of the CUNY Baccalaureate program, Rivelli is taking the course in order to fulfill her geology and agricultural science requirements said she was attracted to the idea of studying under a female scientist. “In my experience,” she said, “women are not represented nearly as much as men are in scientific fields of study. It was refreshing to work with a female geologist.” While studying with Dr. Alexander, Rivelli realized she actually had an affinity for geology and decided to pursue it a little more wholeheartedly.

Sean Thatcher, who is minoring in geology, never thought he would be able to have such immediate success studying geology. A few years ago, he was in an accident that left him in a wheelchair and he did not think it would be possible to study geology so thoroughly. Dr. Alexander made it a point that if she was taking her class on a fieldtrip, they would go to a site that was wheelchair accessible, which is how the class ended up behind new construction, in the back of a parking lot right next to a newly exposed outcropping in North Bergen.

Thatcher, undeterred, became the class’s unofficial data recorder. “Dr. Alexander was really great about this (finding an accessible site), I can’t do what everyone else could so I did a lot of the data recording.”

Both students feel that they learned more than they believed they would from studying with Dr. Alexander. “Science is something that needs to be done,” said Rivelli about her work in Dr. Alexander’s sedimentology class. At CSI, students are learning that the classroom extends far beyond its four walls and that even the most humble of roads can hide fascinating discoveries.