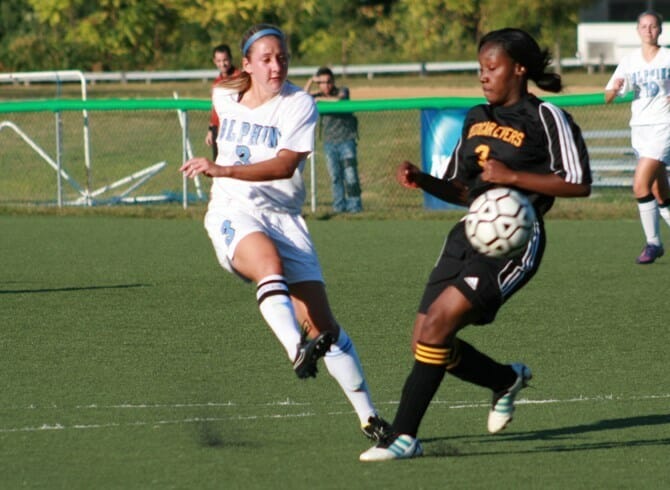 In a game that started after a one-hour delay, the College of Staten Island’s women’s soccer team took out Medgar Evers College, 10-0, in what was the CUNYAC opener for both teams at the CSI Soccer Complex.  The win improved the Dolphins’ record to 2-3-1 overall and 1-0 in the CUNYAC, while the Cougars drop to 0-5, and 0-1 in the CUNYAC.

The Dolphins wasted no time getting on the scoreboard as Kristy Colangelo was able to intercept a short goal kick and go one-on-one with the MEC goalkeeper Marlene Thompson and tucked it away for her first goal of the season.  Just four minutes later the Dolphins would add another goal after Melissa Gelardi was able to sprint down the right sideline and send in a low cross to the back post where Senda Karagozler was waiting to tap it home to make it 2-0.

Medgar Evers’ defense had no answer for the Dolphins’ attack as every time they cleared the ball it seemed to go to a CSI player.  Tylar Simon was able to record the first goal of her career at the 28:38 mark (making it 9-0) when Jennifer Cosenza crossed the ball in to a wide open space and Simon confidently struck the ball into the back of the net.

The Dolphins would go on to outshoot the Cougars 37-0, with 26 of the shots hitting their mark.  Marlene Thompson did her best to keep her team in the game as she was able to make 16 saves on the day.

CSI will next take on the Lightning from Lehman College on Saturday, September 20 at 2:00pm at the CSI Soccer Complex in Staten Island, NY.

Fans, don’t forget to follow us on Twitter @CSIDolphins for all highlights and goal updates during games if you are unable to make the game.  You can also listen in at www.csidolphins.com/watch for play-by-play commentary of all CSI home games.