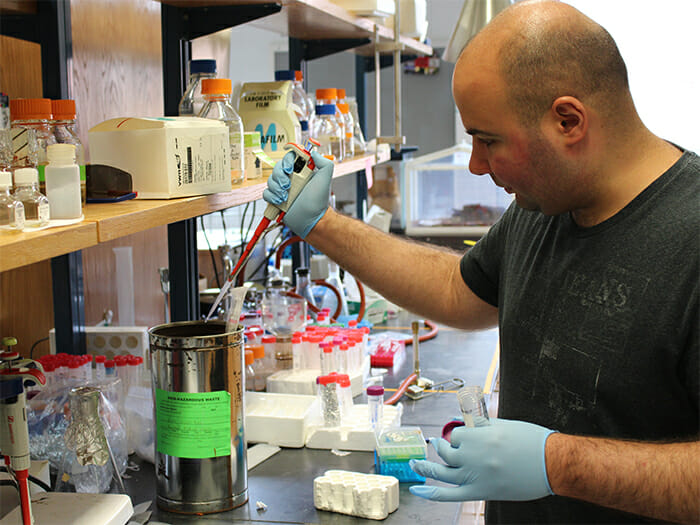 Since 1987, a group of exceptional faculty from multiple disciplines has been working at The Center for Developmental Neuroscience and Developmental Disabilities (CDN) at the College of Staten Island in order to understand the etiology of mental diseases, intellectual and developmental disabilities, and other brain diseases as well as to provide outstanding education to undergraduate and graduate students.

In 2002, the professors of the CDN established the Master’s program in Neuroscience and Developmental Disabilities with the idea of increasing the opportunities of higher education for Staten Island students interested in the neurological aspects of disease.

Since the program’s inception, more than 450 have enrolled in the Master’s in Neuroscience, consequently having an extremely positive impact on the community. The program allowed numerous students to continue with their education in healthcare (MD, dentistry, nursing) at the doctoral level, or to directly enter the job market at local Staten Island institutions dedicated to assisting people with disabilities such as Eden II, The G.R.A.C.E Foundation, and Staten Island University Hospital. Very successful scientists have started their careers with the Master’s in Neuroscience program. These remarkable professionals are now at CUNY, SUNY Downstate, Harvard University, University of Chicago, Washington University, Columbia University, Cornell University, Albert Einstein College, MIT, University of San Francisco, Stanford University, NYU, and the New York State Institute for Basic Research (IBR). Among these professionals, who had their start at the CDN, is Dr. Zaghloul Ahmed, who is now a Professor in Physical Therapy and also Dr. Abdeslem El-Idrissi, who is now the Chair of the Department of Biology at CSI. More recently, Jasmen Khan, a 2014 graduate, became the Science Outreach Coordinator at Rockefeller University. In fact, the CDN boasts the largest number of Neuroscience Doctoral students in the entire CUNY system, and offers the only Neuroscience Master’s program with emphasis on developmental and intellectual disabilities in the country.

Another remarkable success story is that of Antony Castiello, a Master in Neuroscience graduate who is currently doing research as an ad honorem volunteer in Dr. Dan McCloskey’s and Dr. Sebastien Poget’s labs at the CDN.

Like most students working with CDN faculty, Castiello performs his research because of his passion for neuroscience—without any promise of monetary gain. He is a native Staten Islander who graduated from Tottenville High School in 2003 and enrolled at CSI to pursue a Bachelor’s degree in Science[TM1] and Economics, which he received in 2007. After a two-year hiatus, he chose to pursue the Master’s degree in Neuroscience at the CDN,which he finished in 2012. Castiello has a very personal motivation and interest in neuroscience that goes beyond the desire for a job. He has been working tirelessly to understand the chemical and physiological changes underlying Asperger Syndrome because he has been diagnosed with this syndrome. Dedicated students like Castiello and passionate faculty make the CDN one of the most unique research centers in the country.

When applying to the Master’s program, Castiello wrote: “I want to study neuroscience to use my knowledge of biology and psychology to find ways to alter the chemicals in the brains of people with Asperger’s so they can function as normal individuals and succeed in life.”

He also quoted that his Asperger’s would be a great help for his research because he could devote as much time to studying since he does not have a social life.

In May of 2013, Castiello published his thesis entitled Developmental Hypothyroidism Effects on Dopamine 2 Receptors in the Dorsal Striatum in Adult Rats. During his research, he discovered that “there are hormonal sexual differences between males and females with Asperger.”

Recently, Maria Saldarriaga, a young woman who is highly motivated to understand what progressive supranuclear palsy has done to her body and her brain, applied to the Center and has been accepted as a Master’s student in Neuroscience. In her letter to the Admissions Committee, Saldarriaga referred to herself as a “Renaissance woman” due to the fact that she has “adapted various coping mechanisms to deal with the challenges I have faced, both psychologically and physically.” She also explained that she is “still curious to this day to explore on an exterior scientific level my anomalies. This is my motivation to understand what makes me different—this will allow me to embrace, understand, and work with my challenges instead of fearing them. Neuroscience will give me the tools to discover more about my ailments and to the use that knowledge to provide a better quality of life for myself and others.”

One of the most important aspects of this Master’s program at the CDN is the amount of scientific research that students conduct under mentor supervision and the numerous laboratory skills they acquire–skills that easily transfer into any other research settings. Students conduct at least two semesters of research followed by a public defense of their data in front of a panel of professors. These practical skills are one of the keys of the success of the Master’s program in Neuroscience at CSI. However, all this training in active neuroscience laboratories conducting experiments has a high cost. The cost of covering the students’ research projects comes mostly from funds awarded to the professors at the CDN and funds from local foundations and institutions. Dr. Alejandra Alonso, the Director of the CDN and coordinator of the Master’s program, explained that Center faculty are also working on incorporating professional certifications and a Professional Science Master’s program to give students even more qualifications that would allow them to better fit in the job market. Leonardo Pignataro, Academic Affairs Specialist at the CDN, explained that it is paramount to “keep the research laboratory classes so the students acquire practical skills.” Unfortunately, the recent economic downturn has reduced funding and has affected tremendously the number of funded projects awarded to CDN professors, which in turn, has negatively impacted the amount of funding available for students like Castiello or Saldarriagato carry out their research projects. This can cause a ripple effect where the lack of funding can be detrimental to research and education that has a positive impact not only on the Staten Island or the NYC community, but potentially on anyone who might one day benefit from the research being done at the CDN. Center faculty members are certain that training students in neuroscience fosters intellectual potential that will work toward solving mental disorders that burden our community in the future. “The solution to autism, epilepsy, Alzheimer’s disease, or neurodegeneration might come from work done by one of our students” said Dr. Alejandra Alonso.

The CDN has been reaching out to several organizations, as well as alumni and other private donors in order to bolster funding for the program. The scientific and cultural impact that the program has and will continue to have on the Staten Island community is immeasurable, but the Center must rely on these critical donations to help fund this important program.

For more information about the CDN or to find out how to donate to the program, visit: www.csi.cuny.edu/cdn/support.php.