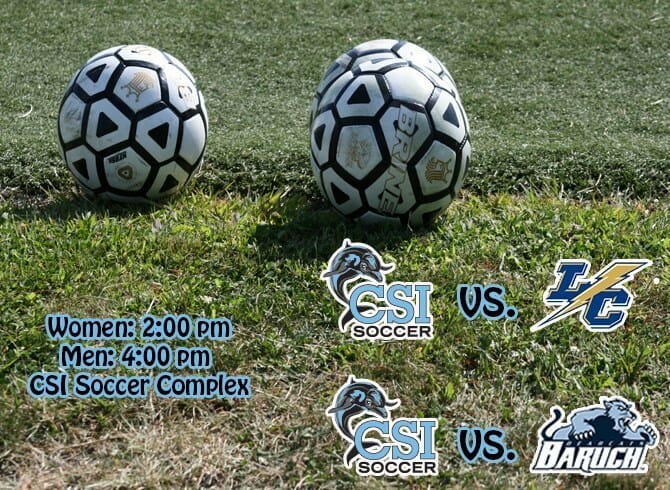 The College of Staten Island’s men’s and women’s soccer teams are in action today at the CSI Soccer Complex in Staten Island, NY.  Our first game of the afternoon will see the women of CSI taking on Lehman College who have a 4-1-1 overall record and are 1-0 in the CUNYAC after taking down York College at 2:00 pm. The men who have a 2-5 overall record will be taking on the Bearcats of Baruch College today at 4:00 pm in their first CUNYAC test of the season.

Lehman College is coming off of a 3-0 win against CUNYAC opponents York College in which Juliana Generoso, the second leading scorer in the CUNYAC, scored the third and final goal of the game. The Lightning have never beaten the Dolphins in their short history as a team, and they will hope to change that today.

The Dolphins are coming off of a huge 10-0 victory over Medgar Evers College that took place on Wednesday.  CSI will hope to use the momentum of that win to string together two wins in a row for the first time this season.  Danielle Smith and Senda Karagozler lead the team with three goals apiece and will certainly look to add to their totals today.

The men will take to the pitch this afternoon to take on reigning CUNYAC champions Baruch College, who are coming off of a 3-2 win on the road against Old Westbury.  The Bearcats made it to the NCAA tournament last year via the automatic qualification after winning the CUNYAC title and were knocked out in the first round by Stevens Institute of Technology 2-0.

The Dolphins are 2-5 after starting the season 0-5 after a few tough games.  Since then the Dolphins have dramatically improved their play and have won two straight with a big win over New Jersey City University 3-1.  Nicholas Bacarella is the team’s leading scorer with three goals and will hope he can lead his team to victory over the Bearcats and continue their win streak.

Fans, if you are unable to make either of today’s games you can listen along at www.csidolphins.com/watch or you can follow along on our Twitter @CSIDolphins