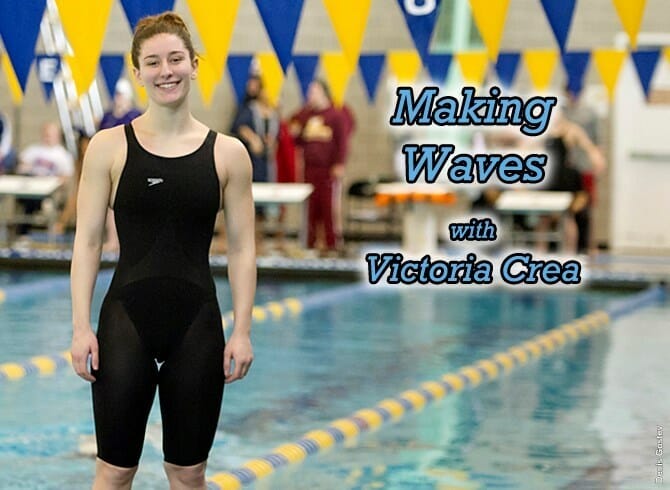 For someone so busy, Victoria Crea had quite a lot to think about last Thursday evening.  The first-year College of Staten Island sophomore had less than 24-hours before preparing for the biggest swim race of her life at Lehman College as part of the CUNYAC Championship, but was also trying to size up how she’d fare against the Cardinals of York College on the basketball hardwood that same evening.  From the start, Crea’s first passion and call to service was for basketball, but she admits to really wanting to perform at the swimming championships at Lehman.

“The 50-yard Freestyle is my favorite race,” said Crea.  “I like that it’s an all-out sprint.  It’s the type of race where you don’t worry about anyone else; you just do what you have to do.”

For the CSI sophomore, doing what needs to be done appears to be more than most.  Beginning in late-August Crea’s involvement with basketball actually led her to the cross-country circuit under Head Coach Robert Russo.  Like many members of the women’s basketball team, Crea automatically lent her efforts to cross-country in hopes of keeping fit and in top condition.  What resulted were a CUNYAC All-Star selection and a Top Ten finish at the CUNYAC Championship at Van Cortlandt Park, where she led a team that went from last to second in the overall standings.  By that point, Crea was three weeks into the basketball pre-season, and stated her intentions on wanting to swim as well.

“I spoke to (CSI Head Swimming Coach) Mike Ackalitis over the summer and he kept asking me to swim and I wanted to as long as it didn’t interfere too much with basketball,” explained Crea, who transferred from NCAA Division II New York Institute of Technology over the summer, where she only played basketball.  “Mike was very understanding and worked with my basketball schedule.  I’ve been swimming and diving since I was five years old, so I’m always excited about it.”

That excitement has translated to instant success, and Crea hit the ground, and the pool, running.  After a series of great races during the season, Crea was positioned nicely in her individual events at the CUNYAC Swimming Championships this weekend, both in the 50- and 100-yard Freestyle events and on the one-meter diving boards.  Doing both isn’t easy; doing both with a varsity basketball game in-between would prove impossible for most, but Crea started it off with a first-place finish in the 50-yard Freestyle on Friday afternoon, narrowly edging out teammate Samantha Escobedo with a time of 25.77, a new CSI record and just over a half-second off the all-time fastest time in the CUNYAC Championship.  For Crea, who was also a part of the gold-medal 200-yard Freestyle Relay team earlier in the afternoon, she didn’t have much time to enjoy the moment in the spotlight.

“As soon as the race was over I literally dropped my bag, threw on sweats, and jumped in my mom’s car,” Crea said with a laugh.  “I had to get changed for the game in the backseat and I was still late.  Basketball is my main sport and I hate missing out on games and practices.  I guess I was still in shock but also so happy that I had won the 50 Free.  That was my goal for this season.”

The emotional high did wonders for her fatigue level.  She credits the adrenaline rush with being able to perform well against York College that same evening.  Crea literally arrived at York’s gym in Jamaica, Queens, minutes into the first half.  After a short delay, she entered the game with over 11 minutes to play in the initial stanza.  Less than two minutes later, Crea knocked down the first of 15 points in CSI’s 83-58 win.  She would add six rebounds and a trio of assists in 24 minutes of work.  “It wasn’t until the game was over that I realized I was pretty tired,” she said.

Less than 12 hours later, Crea was back on a swimming bus headed back to Lehman College to dive.  The standout never did have time to reflect on what she had accomplished the day before.  “Don’t get me wrong, I thought it was awesome to win at CUNY’s, but I was just really excited to be a part of such great teams.  Things like this don’t happen often and I was really happy.”

On Saturday, Crea would place second on the diving boards behind senior teammate Stephanie Collyer, and then added another gold as part of CSI’s 200-yard Medley Relay.  Less than 24 hours later, Crea took center stage in another signature event, the 100-yard Freestyle, on Sunday morning, and smashed the competition to the tune of a 57.65 swim, almost two seconds better than the competition.  For Crea, it was the perfect ending to a perfect weekend.

“I thought I swam to my full potential, and the team did amazing: breaking records, dropping times and performing personal bests,” she said.  “Coupled with seeing the men win the championship, it was nice to see all the hard work for everyone paying off.”

Still knee-deep in basketball season, Crea’s year is far from over, but one thing is certain; it’s her finest athletic year yet, and she credits a lot of that to not just who she is, but where she is.  “I’m honestly surprising myself with each sport.  CSI has opened up a lot of opportunities for me to try new things and I am loving every minute of it,” she explained.  “My passion has been basketball and although I’ve done track and swimming and diving I never for a minute thought I’d be doing these sports at the college level.”

The basketball season will soon be coming to an end, with the CUNYAC Championship on the horizon in late-February, but don’t expect Crea to lose any steam heading to the finish.  For the sophomore Psychology major, this season started with just one mission, to bring a basketball title back to CSI.  “We’ve been coming together as a team with each game and everyone is so focused,” Crea said.  “Just playing and doing what I love is enough for me, but I would love to win it all and be CUNYAC champs.”

No matter what the result, Crea has had a phenomenal first season with the Dolphins, with the promise of plenty more to come.  Unfortunately for her followers, Crea doesn’t plan on doing much beyond March, other than hitting the books, the weights, and the track.  When asked whether she’s thought about playing another sport at CSI, Crea was quick to cut in.  “Softball was never one my strengths,” she answered.  “I’ll just stick to what I know.”

The Dolphins’ basketball squad will travel to Medgar Evers College on Tuesday before a meeting with first-place Baruch College on Friday.  The CUNYAC Women’s Basketball Tournament begins Saturday, February 21, at 1pm at the College of Staten Island for quarterfinal play against an undetermined opponent.