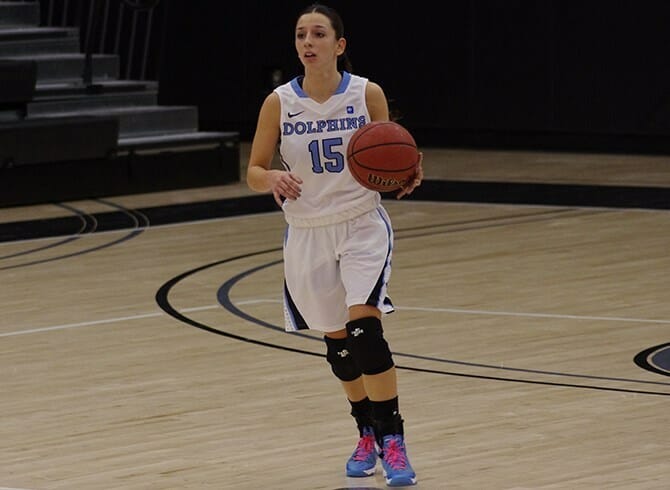 The College of Staten Island women’s basketball squad saw their modest winning streak move to two, as the Dolphins powered past York College as part of CUNYAC play on the road this evening, 83-58.  CSI improved to 13-9 overall and 10-3 in the CUNYAC, while the Cardinals fells to 7-13, 4-8, respectively.

CSI led wire-to-wire in this one, never trailing in the contest, as Jamie Pifalo scored the opening basket, a three-pointer.  Early on CSI gained control via a 7-1 run that gave the Dolphins a 10-4 lead and later the team went up by double-digits, 17-7, with 15:44 to go in the half thanks to a Victoria Gallinaro three.

A numbing 16-4 run by CSI, powered by a pair of Megan Myhre three-pointers, gave CSI a gaping 38-19 lead, helping fuel the Dolphins to a 46-31 halftime lead.

CSI used a 15-4 spurt to open the second half to seemingly put the game away, 61-35, with 14 minutes left to play, helped along by three Gallinaro buckets.  York refused to go quietly, but even a feverish comeback could only get them to come to within 14 the rest of the way, as CSI was able to eventually cruise to a 25-point win.

Gallinaro led all Dolphins with 16 points adding seven rebounds.  Victoria Crea, who joined the team late after participating in the swimming and diving championships at Lehman College, scored 15 points, while Myhre added 13 and Pifalo 12.  The Cardinals were paced by Angelika Ruggiano’s 24 points, while Stayce Kay Muirhead scored 13 points and 14 rebounds.

CSI is next in action on Tuesday, February 10, when they travel to face Medgar Evers College, at 6pm in Brooklyn.