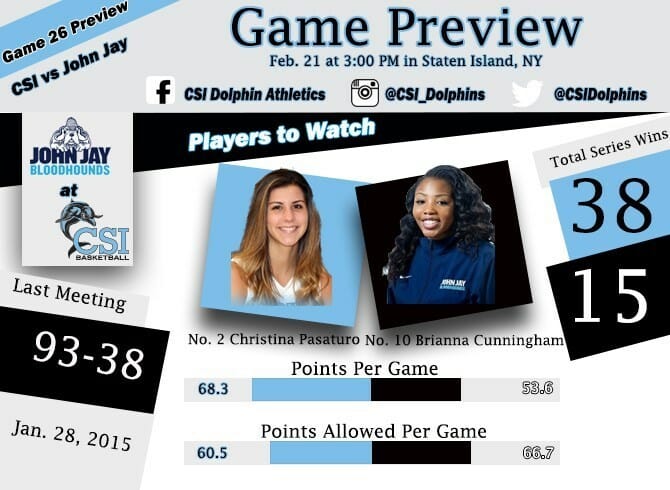 The Dolphins come into today’s quarterfinal having locked up the No. 3 seed in the tournament via a gritty, 58-52,
win over Lehman College at the Sports & Recreation Center on Tuesday. CSI held a modest, 24-19, lead at halftime of
the defensive struggle, as the teams combined to go just 37-of-130 from the floor (28.4%). Megan Myhre led all CSI
scorers with 20 points, while Nikki Fabozzi topped out at seven points and 11 rebounds. The Dolphins committed
25 turnovers, but were a +6 in the rebounding column (53-47)…The Bloodhounds are coming into today’s game on a
season-best three game win skein after having dropped six-straight. It included a couple of very close wins against
York (50-48) and CCNY (48-47).

CSI and John Jay have met frequently in CUNYAC Tournament play, but it has been awhile since the two sides have
drawn one-another. CSI holds an all-time, 4-3, edge, having won the last meeting back in the 2006 Semifinals by a
77-69 count. That was the last time the Dolphins won a semifinal game in tournament play. Today marks the third
time the two teams are squaring off in the quarterfinal round, with CSI holding a 2-0 edge there. CSI has won seven of
the last 9 in the overall series, and have not dropped a home game to John Jay since February 1, 1995, spanning over
20 years and 11 games. The Dolphins’ 55-point win over John Jay earlier this season was their largest in the series
vs. the Bloodhounds since 1998.

The Dolphins’ 12 CUNYAC wins this season are tied for the second-highest ever in CSI history, matching their 2012-13
total. CSI defeated the six CUNYAC teams below them in the standings twice, by an average of 23.5 points per game.
A magic number for CSI this season is 70. When the Dolphins score more than 70 points in a game this season, they
are a perfect 8-0, but are just 7-10 when they do not. Forcing turnovers has also been the team’s calling card this
season. The Dolphins are a +6.4 in turnovers per game. The Dolphins are also 6-2 in games where they commit less
than 15 turnovers..The Dolphins will also be looking for a good performance from the free-throw line. CSI is 7-1 this
season when connecting on 70% or better of their foul shots. In two games against John Jay this season, CSI shot 21-
26 from the stripe, good for 80.7%. Conversely, the Bloodhounds had their struggles in the two games, connecting
on 34-of-60 (56.7)…CSI freshman Christina Pasaturo is chasing 400 points this season, needing only 14 more markers
to complete the feat. If she hits the mark, it will be only the 23rd time in CSI history that has happened. She has
also connected on 56 three-pointers, good for 10th all-time in a single season. Only two players, one of them Megan
Myhre, have hit more than 70 in a single season…Sophomore Alyssa Carlsen has posted 37 blocked shots this season,
the second-highest all-time in a single season at CSI, and the most since Donya Ramsey’s 58 way back in 1991-92…
CSI’s 201 three-pointers this season is the third-highest in their history, six behind their mark in 2007-08. CSI set a
school record with 227 three’s a year ago.