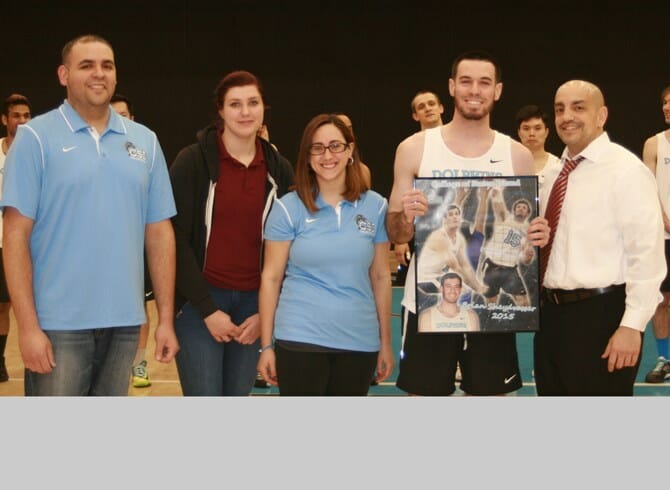 Beavers spoil the Dolphins’ senior night as they went on to defeat CSI 3-1.  These two teams were so evenly matched that each set was decided by five points or less.  With the win the Beavers improve to 6-19, and 4-10 in the CUNYAC while the Dolphins fell to 5-17 overall, and 4-9 in the CUNYAC.

The first set was a nail biter all the way to the end as neither team could really get a grip on the set and gain a commanding lead.  The Dolphins lead as much as 6-3 early in the set before the Beavers clawed their way back to tie it up at 10 apiece. Anthony Reyes, the kill leader in the CUNYAC gave CCNY the go ahead point which turned out to be the winning point as the Dolphins were never able to regain the lead.  The Dolphins only managed to get seven kills in the first set on .029 hitting while surrendering six errors.

Set two followed suit and kept the fans on the edge of their seats as the Dolphins once again jumped out in front only for the Beavers to dam the Dolphins attack once again and take the lead very late in the set.  The score ping ponged back and forth midway through the set as both teams looked out of sync serving the ball and combined for 12 errors in the set.

Down 0-2 the Dolphins were staring defeat in the face and refused to back down as they fought hard and had a dominating 7-3 lead early in the set before the Beavers were forced to call a timeout.  That timeout seemed to setting the Beavers which allowed them to get back into the set and eventually take a 19-17 lead over the Dolphins which in turn caused Coach Lopez to call a time out to try and rally his troops.  Just like the CCNY timeout it seemed to do the trick as the Dolphins broke down the Beavers’ dam and took game three from under their noses.

The fourth and final set of the night portrayed a tired Dolphins team.  They fell behind early and weren’t able to recuperate.  CCNY controlled most of the set however the Dolphins were able to make a late push towards the end but it was too little too late and the Beavers sealed the deal with a 25-20 win.

Justin Edwardsen lead the Dolphins with 10 kills on the night with a .121 hit percentage while senior Philip Szumanski lead the team in assists with 23 and one error.  Fellow senior Brian Sheydvasser had seven kills on 29 attempts, good for a .034 hit percentage on the night.

The Dolphins are back in action on Saturday when they will head to CCNY to play in their multi-match against John Jay and Lehman College.