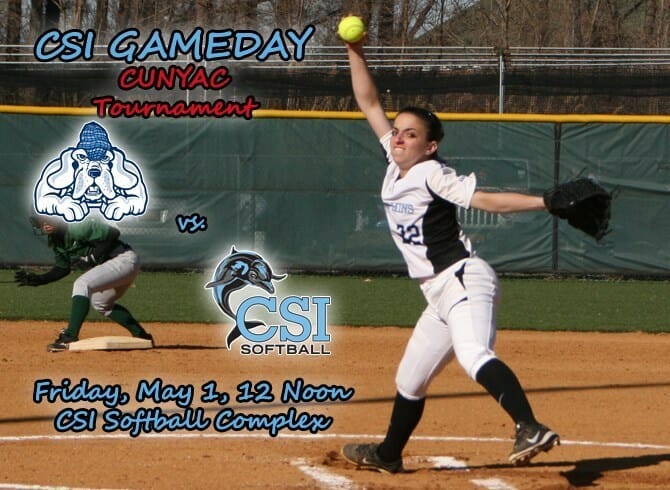 The College of Staten Island women’s softball squad just wrapped up a terrific regular season, and now the CUNYAC Regular Season Champs will look to elevate their game, as they get set to usher in the 2015 CUNYAC Postseason Championship Tournament on their campus, beginning tomorrow. The top seeds in the conference by virtue of their 11-1 mark, CSI will take on No. 4 John Jay College to kick-off the tournament at the CSI Softball Complex tomorrow. The tournament continues throughout the day and finalizes on Saturday, with all legs of the tourney taking place on the Staten Island campus. Sunday is the rain date.

After CSI tangles with the Bloodhounds, No. 2 Hunter College will take on No. 3 Brooklyn College in the other opener. The two losing sides from each of the first two games will play an elimination game, scheduled for a 4pm start, with the two winning teams squaring off at 6pm with an automatic berth to the Championship on the line. The tournament starts again on Saturday with the loser’s bracket final at 12pm, followed by the Final at 2pm.

The Dolphins enter the tournament on a six-game win streak, matching a season high. The team finished 27-10 on the regular season, fast approaching the school’s all-time win record of 28 set in 2007, when the team finished 28-13. The great run this season features 9 straight wins over CUNYAC opponents, among them a doubleheader sweep of John Jay on April 19, by scores of 4-3 & 20-1. The Dolphins have won 11 games in a row against the Bloodhounds dating back to the 2010 season, and own an all-time 16-1 record against them in the CUNYAC postseason. The Dolphins are also the back-to-back defending CUNYAC Postseason Champions, having won 12 out of their last 13 CUNYAC postseason games.

Despite the winning pedigree, don’t expect Head Coach Stella Porto or her unit to take their foot off the gas this weekend. The coach contends that the rest of the conference saves their best softball for this very weekend, and CSI needs to do the same to guard their championship status.

“There’s no quit on this team,” said Porto. “Our players approach every game and every inning with determination and focus. They know what is at stake and one thing about our team: they want to win very badly and get back to Nationals.”

CSI will certainly be classed as the favorite heading in and have the numbers to prove it. Against a very competitive out-of-conference schedule, the Dolphins finalized with a team batting average of .337, and a team ERA of 3.36. CSI’s 360 hits this season are the fourth-most in their history, as are their 294 runs scored, and 62 doubles. The team’s 193 total strikeouts are the third-highest in their history. The team has also been one of the conference’s best fielding teams, but according to the coach, that will be the cornerstone to a successful championship run.

“Defense wins championships and it’s no different in softball,” said Porto. “We have been focusing on our defense in recent weeks and we know that will be a key for us. We’ve won and lost close games because of our defense, and going up against national-caliber teams, we know how defense effects close games, so we will need that to be one of our top priorities this weekend.”

A potent lineup will help guide the Dolphins, as offensively the Dolphins are averaging 7.95 runs per game. Defending CUNYAC Player of the Year Christina Tufano is leading the way with a .437 batting average, setting a school record this season with 54 RBI. Chyanne Gilliam follows with a .424 average with a team-best five homeruns. The hit parade continues with the likes of Maxine Jasko (.398, 29 RS), Brittany Smith (.369, 49 RS, 30 SB), Danielle Locke (.363, 33 RBI), and Jacqueline Cautela (.317, 26 RBI).

“We have power from top to bottom in our lineup but our biggest weapon offensively is how smart our batters are,” the coach contended. “Our hitters are seeing the gaps, staying aggressive and doing well with a lot of the increased outside pitching we are seeing. It’s something that we worked on a lot during the offseason and you can see it paying off now.”

Porto’s powerful lineup is met with great performance in the circle. Sophomore Cautela leads the way with a 13-6 record and a 2.72 ERA. She has fanned 78 batters in 110.2 innings, and opponents are batting just .227 against her. Nicolette Trapani has starred as well as a freshman, posting a 13-4 mark with a 3.73 ERA in 114.2 innings, fanning a team high 105 batters. Together with Samantha Bowbliss (1-0, 2.55 ERA), who weathered early-season injury and earned her first win of the season just yesterday, Porto knows they are as deep as ever at the pitching position, which means a lot come playoff time.

“To be honest the single most important thing for us going into the season was to develop depth at pitcher and I think we have that now,” Porto stated. “Having versatility and the ability to keep teams off-balance has helped us so much this season, and it’s allowed us to win close games. Especially this deep into the season, you need depth to get you through, and we have that now.”

The CUNYAC Championship winner will earn an automatic berth into the NCAA Division III National Championship Tournament, and the Dolphins are hoping for their eighth invitation to the show.

“Like any coach, I just want us to finish strong and play good, fundamental softball,” Porto said. “If we play clean in the field we are a hard team to stop. The sportsmanship and the mindset our players carry is where we need it to be. We would love to win it again and we know we are in a position to do that.”

All legs of the CUNYAC Tournament held at CSI are FREE for attendees. Folks who cannot make the games can follow live coverage of CSI’s games with bothlive statisticsand live audio and video throughCSI SportsNet.