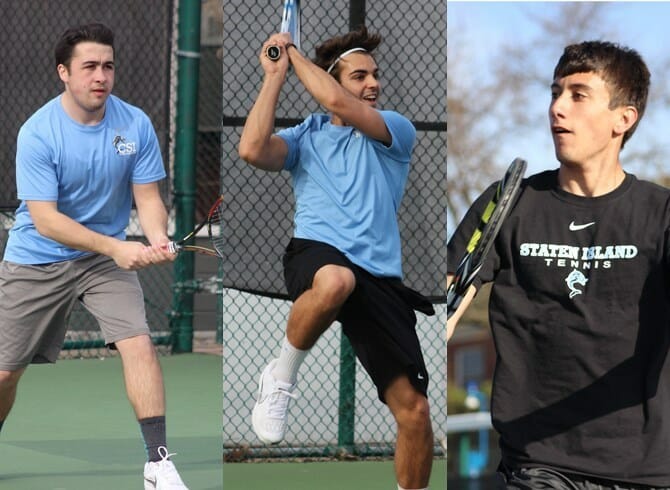 The College of Staten Island men’s tennis team enjoyed a great 2015 campaign that will conclude on Thursday, and the team was rewarded handsomely with a collection of yearly citations from The City University of New York Athletic Conference.  First-year head coach Arthur Kapetanakis earned the highest distinction as the conference’s Coach of the Year.  Seniors Ed Ruffe and Austin Kapetanakis joined freshman Chris Livoti as first-team CUNYAC All-Stars, while frosh Raymond Hwang was positioned on the second-team.

“It’s definitely a great honor for me,” said Kapetanakis, who literally joined the team two weeks before the start of the 2015 season.  “Coming in so late, I have to thank my assistant coaches and my seniors for their support and their immediate buy-in, which really helped set the tone for the season.  I’m grateful to the voters who recognize that our program is heading in a positive direction.”

Kapetanakis led the squad to a 9-4 overall record and a trip to the CUNYAC Semifinals, complete with a 6-1 conference regular season title and a share of the regular season championship, led by seniors Ruffe and younger-brother Austin Kapetanakis.

Ruffe, a fixture in the No. 1 Singles and Doubles positions put up a solid campaign, going 7-5 on the season in singles and 8-5 in doubles, all at the pole position.  A CUNYAC Scholar-Athlete of the Year Honorable Mention, Ruffe is a third-year player for the Dolphins, graduating early.  The younger Kapetanakis played a majority of his time at the Nos. 2 & 3 spots in the order this year.  Kapetanakis finished 4-0 at No. 2 Singles and 6-3 at No. 3 Singles, which included a 6-1 conference mark.  He also teamed with fellow all-star Chris Livoti to sport a 9-1 doubles record, all at the No. 2 position, and went 11-1 overall in doubles play.

“I think as a team we realized that we did a lot of good things in a short period of time and we can only imagine what we can do given a proper off-season and preseason,” Kapetanakis said.  “I think we can all agree that we are a program headed in the right direction and we have a lot to be proud of.”

CSI’s season officially comes to a close on Thursday, when they travel to face St. Joseph’s College of Patchogue for a non-conference contest at 6pm on the road.  The match is a make-up from a previously rained out contest in mid-April.