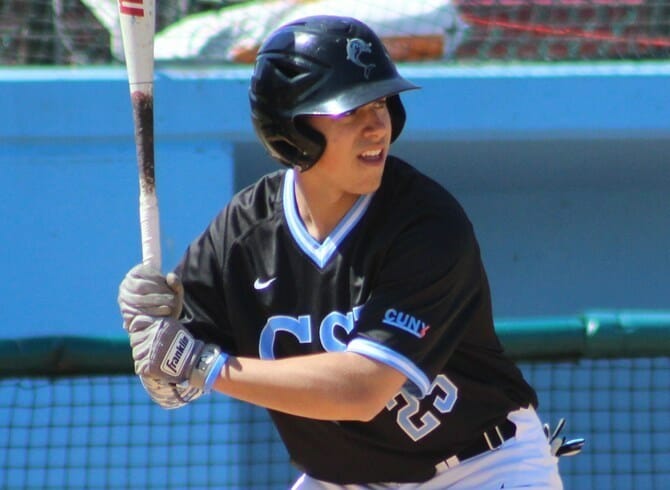 Resuming a match that was suspended last night due to fog in the eighth inning, the College of Staten Island men’s baseball squad earned a 4-3 win over City College of New York to advance to the CUNYAC Championship Final today at 4:00pm at MCU Ballpark in Brooklyn, NY.  CSI will face Baruch College in the Championship needing a doubleheader sweep, while the Bearcats need to win a lone game to claim the title.

CSI was down 3-2 in last night’s contest, before scoring a tying run in the seventh.  Play moved into the eighth inning, and Glenn Glennerster led off with a double, and after registering an out, Glennerster moved over to third on a Phil Ciprello single.  Play was then halted as intense fog made play impossible, and the game was called.  Play resumed today and Jhosse Estrella took the mound for CCNY.  He made an early mistake, throwing a wild pitch on an at-bat by Frank Sconzo, scoring Glennerster.  That’s all CSI would need.  Despite stranding a runner on base, Jason Failla came in to pitch the ninth for CSI, and he returned the Beavers in order.

Gerard Esposito, who was the pitcher of record for the Dolphins last night, took the win while Failla will get the save.

To follow live statistics of the CUNYAC Championship, go to www.sidearmstats.com/cuny/baseball.