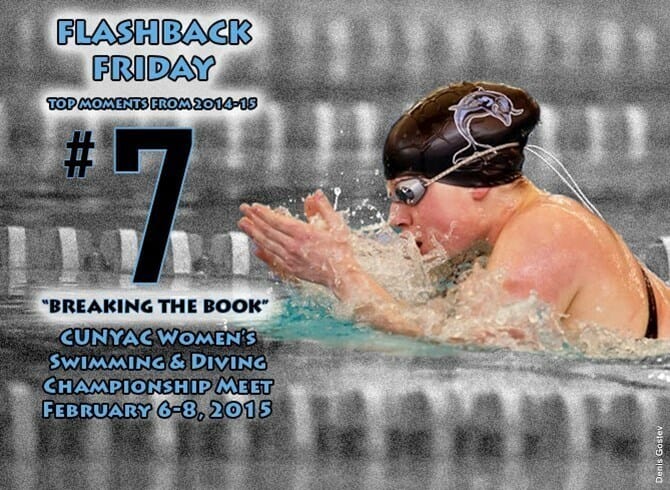 Flashback Friday looks at the top moments from the 2014-15 athletic year at the College of Staten Island.  This week we reflect on the 7th-highest moment of the past year, when the CSI Women’s Swimming & Diving Team broke a total of 13 CSI and CUNYAC records at the annual CUNYAC Championship Meet.

#7 – Women’s Swimming & Diving – Records Fall Hard at CUNYAC Championship
Date:  February 6-8, 2015
Who:  CSI Women’s Swimming & Diving Team
Where:  Lehman College – Bronx, NY
What Happened:  The Dolphins entered the 2015 CUNYAC Championship Meet at Lehman College knowing their odds of winning were small due to a slender roster size, but it didn’t prevent the Dolphins from targeting an impressive weekend, one that would make plenty of heads turn.  Needless to say, CSI did just that on the way to a third-place team finish at the annual event.  The three-day event started with a tremendous opening night for the Dolphins that featured a total of six broken records in six events.Two days later, a total of seven more broken records were added.  Diver Stephanie Collyer broke CUNYAC records on the one- and three-meter boards.  Junior Dakota Dawkins also broke a pair of school and CUNYAC records in breaststroke events, while frosh Eva Wojciechowska blew away another three conference records in freestyle events.  Victoria Crea and Samantha Escobedo added records in freestyle and backstroke events, and as a team, CSI broke three school relay records, with Dawkins, Escobedo, and Wojciechowska serving as a common thread in all three.  For her efforts, Wojciechowska was named Permormer of the Meet, and Dawkins was the CUNYAC’s Performer of the Year while winning CSI’s Female Athlete of the Year this past May. Looking back…with Dakota Dawkins
Going into the 2015 CUNYAC Championship, what were the team’s main objectives?  We always focus on doing our personal bests, which I believe we all did in the 2015 season. Of course, we always strive to beat our rivals like Hunter College and Baruch College and I think we were very successful in doing so with our relays. We may have lacked the depth that they have but our coach always tells us to do our best and don’t get psyched out by the competition.

You had a sensational season, breaking records multiple times within the same season.  Was the goal to peak at the CUNYAC Championship?  Even though we compete in two championship meets towards the end of our season our focus is always on CUNY’s. The team works extremely hard during the regular season, building up. The goal is to finish strong at the CUNYAC Championship. It can be discouraging if you lose to an opponent during a regular season meet, but you have to keep telling yourself that you’re not at that point yet and you may not even be there until the very day of your race. It’s all about patience and faith in your coaches.

What’s the major difference between swimming in an individual event vs. being a part of a relay team?  It can be very stressful in both an individual and relay event. Obviously you want to do your best every time in an individual event and make the race count. Most of the time relays are much more intense and exciting because you have your team up there behind the block with you, but sometimes when you know it’ll be a close race you have to keep it in the back of your head that it’s not just you that you’re pushing for. You have to do it for the team.

The team broke 13 records at the CUNY Championship.  At what point in the Meet did you realize the team was on the verge of making this kind of history?  If I can remember correctly I think one of the first relays won first place on the medley relay and we managed to defeat Hunter College and that kind of set the pace for the rest of the meet. I think that a combination of the relays and individuals wins really fired the team up.

Being a part of six school and three CUNYAC records set at the CUNYAC Championship, where does this meet stand out in your mind as far as your career at CSI? It was the best three days of my entire swimming career. So much was achieved and it just proved that hard work and dedication make all the difference. Coming into this division, I realized that there was a lot of good competition and the goal since day one was to get on the record board. Looking ahead to my last season swimming after all the great races we’ve had as a team and all the friendships that have been made during these years, the goal for me is to leave behind a year to be remembered and to work the hardest I possibly can one more time. We have a lot to look forward to like our training trip this winter, which will be an outstanding opportunity for our team to not only practice, but to become even closer than we already are. This is the year that we’ll all leave our mark.

How do you feel the great run this season will help the team achieve great things moving forward? Everyone on this team made the meet such a success. We couldn’t have had the success that we did without the work ethic and positivity that came from each member of the team. I hope they are all as psyched up as I am for the 2015-2016 season.