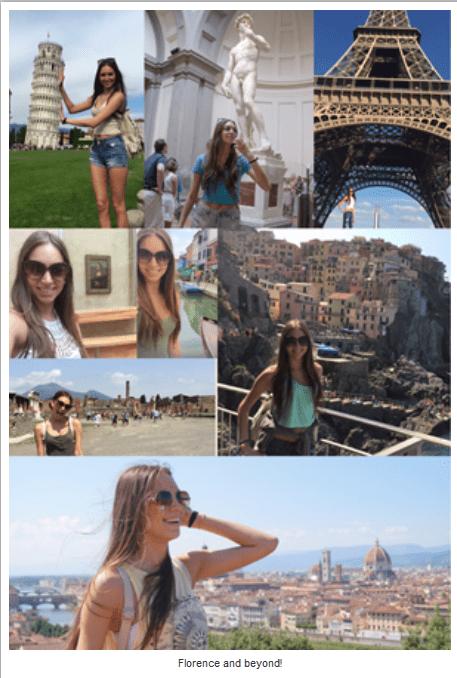 Tayla Lugo ’17 received a Verrazano School Study Abroad Scholarship to take a class on the Medieval Renaissance in Florence, Italy. She spent a month extracting everything she could out of her experience, including traveling well beyond Florence.

My name is Tayla Lugo and I am a Verrazano Student and a double major in English Writing and Literature at the College of Staten Island. This summer I had the privilege to study abroad in one of the most amazing cities in the world: Florence, Italy. I went on a one month long Faculty-led program to learn about the Medieval Renaissance.

I learned about the Medici’s, who were one of the wealthiest families during the Renaissance period, Michelangelo Buonarroti, Donatello, Leonardo da Vinci, Sandro Botticelli, Savonarola, Brunelleschi, and many other prominent figures. My class and I went on many site visits, which included the Academia, the Uffizi, Palazzo Vecchio, a city walk around Florence, the Basilica of Santa Maria Novella, the Horne Museum, and a visit to a Preschool in Florence. At the Academia I was able to view Michelangelo’s masterpiece, the David. The Uffizi, which is one of the oldest and most famous museum in the world, showcased Sandro Botticelli’s The Birth of Venus and The Primavera, as well as many other works by Raphael and Giotto. My favorite museum that we visited as a class was the Horne Museum because it is a secret treasure that is extremely undervalued. This museum once belonged to the Alberti and Corsi families and contains antique furniture and famous artworks.

While in Italy I visited Pisa, Siena, Capri, Ana Capri, Sorrento, Positano, Cinque Terre, Amalfi Coast, Pompeii, Venice, Murano, Burano, Rome, and Paris. Every city was different in its own way, which allowed me to have a greater appreciation for Italy. Studying abroad not only opened my eyes to the endless possibilities in the world, but has also allowed me to escape my comfort zone. I can honestly say that I have matured during this unique experience and my passion for traveling has awakened. I have made true, genuine friendships that will last a lifetime. Florence became my home in an instant and I cannot wait to someday return and maybe even study there again! I am forever grateful to the College of Staten Island for this amazing opportunity and for everyone who contributed to my dream of studying abroad. I hope that my experience will allow other students to inquire about studying abroad and open their minds to the many possibilities that are out there!