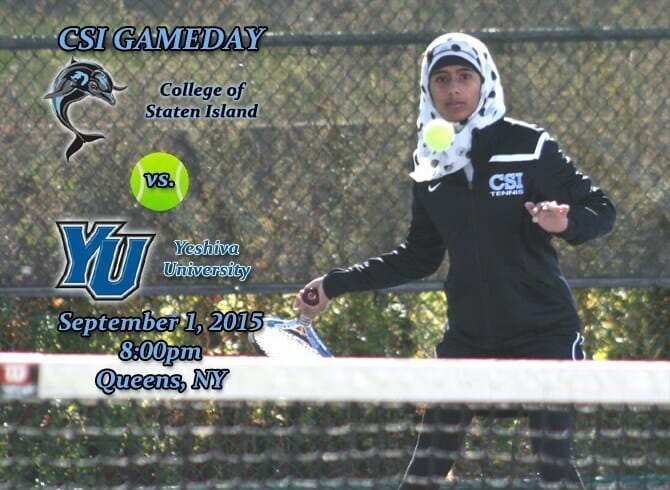 The College of Staten Island women’s tennis squad will introduce the 2015 campaign this evening when they travel to take on Yeshiva University for an 8pm, non-conference matchup.  The match will take place on the campus of Queens College.  First year head coach Arthur Kapetanakis will man the controls for CSI, who return a healthy lot from their CUNYAC Championship team of a year ago.  Yeshiva finished 8-7 last year.

CSI vs. YESHIVA UNIVERSITY AT-A-GLANCE
Matchup:  CSI (0-0 overall, 0-0 CUNYAC) vs. Yeshiva University (0-0 Overall, 0-0 Skyline)
Where:  Queens College,  65-30 Kissena Blvd, Flushing, NY
First Serve: 8:00pm
Last Year’s Result:  CSI won 8-1
Players To Watch (CSI):  CSI returns seniors Sabrina Bragerton-Nasert and Madiha Mulla, who teamed up in doubles last year to the tune of a 14-2 overall record.  Junior Nozima Toshpulatova scored a decisive win over YU’s Jannah Eichenbaum in last year’s contest, 7-5, 6-4, in the top spot.
Players to Watch (YU): Eichenbaum was a leader in the top-spot while sophomore Shani Hava was impressive in 2014-15 with a 7-2 Singles record.
News and Notes:  These two team met this past spring in what was then CSI’s final tune-up before the NCAA National Tournament.  The Dolphins won 8-1.  Yeshiva’s lone win came at No. 5 Singles.