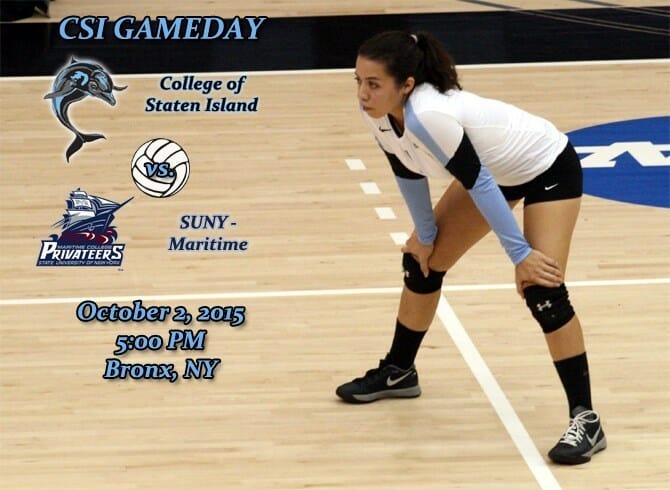 The College of Staten Island women’s volleyball team is back in action tonight, taking on SUNY-Maritime in a 5pm start in the Bronx, NY.  The Dolphins are coming off of a tough loss to St. Joseph’s (LI) and will look to rebound tonight and get back to .500.

CSI vs. SUNY-MARITIME AT-A-GLANCE
Matchup:  CSI (5-6 overall, 1-3 CUNYAC) vs. St. Joseph’s College-LI (7-7 Overall, 2-2 Skyline)
Where:  SUNY-Maritime, 6 Pennyfield Ave., Bronx, NY
First Serve: 5:00pm
Live Statistics:  http://www.sidearmstats.com/maritime/wvball/xlive.htm
All-Time Series:  CSI leads 3-0
Last Year’s Result:  Did Not Play
Players To Watch (CSI): CSI’s Siobhan Granich is coming on strong, and now leads the CSI balanced attack with 68 kills, and is second on the squad with a .115 attack percentage.  Vanessa Reyes is second on the squad with 25 service aces, and will be looked at as a big factor in tonight’s contest.
Players to Watch (MAR):  Carly Lombardo and Shannon Brady have been a great one-two punch for the Privateers.  Lombardo leads with 128 kills and Brady is just a step behind with 114.  Lombardo also leads the team in aces, blocks, and digs.
News and Notes:  CSI and Maritime have not faced one another since the 2009 season, a 3-2 win.  That game was also played at the Sports & Recreation Center.  These teams have shared four common opponents.  Maritime is 2-2 in those games and CSI is 1-3.  The common opponents were Lehman College, Yeshiva University, St. Joseph’s (LI), and John Jay College.