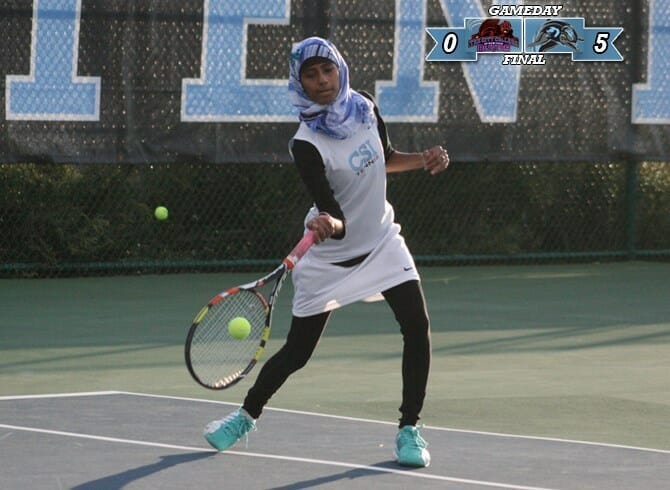 On a rare warm October afternoon at the CSI Tennis Center, the College of Staten Island Women’s tennis squad took a step in the right direction towards their third straight CUNYAC title after they defeated City College of New York, 5-0 to send the Dolphins into semifinal play. CSI will next face Hunter College at the CSI Tennis Center in Staten Island, NY on Saturday, October 24 at 2:30 pm in what will be a rematch of last year’s final.

CSI started with a 2-0 lead before the start of the match due to an incomplete roster from CCNY.

Play began with doubles and CSI added to their lead with a pair of wins to increase their lead to 4-0 over the Beavers.

First duo to get the off of the court was Nozima Toshpulatova and Michelle Kushnir as they secured a 8-0 victory before Sabrina Bragerton-Nasert and Viktoriya Volkova scored 8-1 to put the Dolphins up 4-0 headed into singles.
Needing only one point to clinch victory and catapult the Dolphins to the semifinals Kushnir secured the final point for Staten Island with a 6-0, 6-0 victory in the no. 4 spot.

The Dolphins are back in action tomorrow at the CSI Tennis Center where they will take on Hunter College in the CUNYAC Semifinals at 2:30 pm.