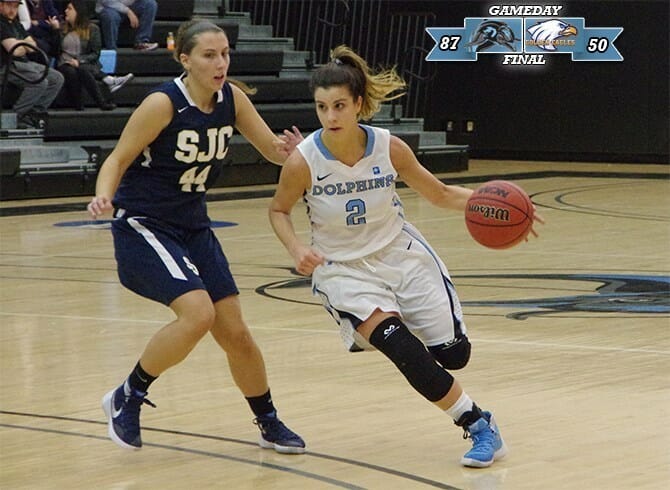 Staten Island, NY | The College of Staten Island women’s basketball squad opened up their 2015-16 campaign with a bang this afternoon when they cruised past St. Joseph’s College – LI 87-50 to improve 1-0 on the year at the CSI Sports & Rec Center.

The Dolphins looked rusty in the early moments of the game as anyone would expect with the start of a new season.  Jackie Zizzo opened up scoring in the afternoon when she drained a three-point shot to give the Golden Eagles an early 3-0 lead over the Dolphins. The Dolphins would answer with a 4-0 run lead by a pair of free throws by senior guard Jamie Pifalo and a layup from reigning CUNYAC Rookie of the Year sophomore forward Christina Pasaturo and would never relinquish the lead after that.

The sophomore duo of Pasaturo and Samantha Flecker stepped up this afternoon and helped the Dolphins win their season opener and improve to 22-13 all-time in home openers.  Pasaturo picked up right where she left off last season leading the way with 19 points for the Dolphins while Flecker poured in 17 from a much improved mid-range game.  Flecker and Victoria Gallinaro were rebound machines tonight picking up eight and 9 respectively which helped limit the Eagles’ second chance opportunities.
The Dolphins really pulled away from the Eagles in the second quarter when they poured in 33 points, a game high, to extend their lead to 56-32.

Freshman forward Rosa Perone started in her first career collegiate basketball game this afternoon and provided a dimension to the women’s team that hasn’t been there in previous years.  Perone’s height allowed the Dolphins to gain an edge inside the paint which led to 9 points and five rebounds for the freshman.  Another new addition to the team Angelique Price a sophomore forward from Staten Island, NY provided the Dolphins with eight points and a trio of rebounds.

Where the second quarter was an offensive explosion for the Dolphins the third quarter was a defensive lockdown as they held the Eagles to just five points.  Staten Island shook off the rust as the game moved on, and it certainly showed as their shooting percentage increased as they became more comfortable with the pace of the game.

The women looked dominant in their opening game and will hope that carries over to Wednesday when they take on Drew University at home in the CSI Sports & Rec Center at 7:00 PM. 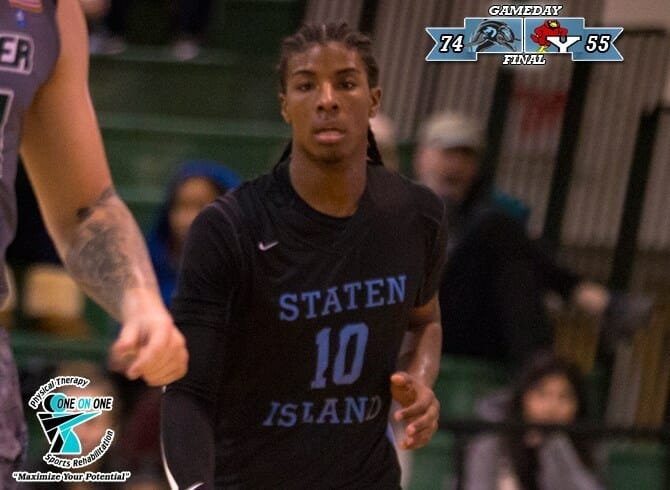