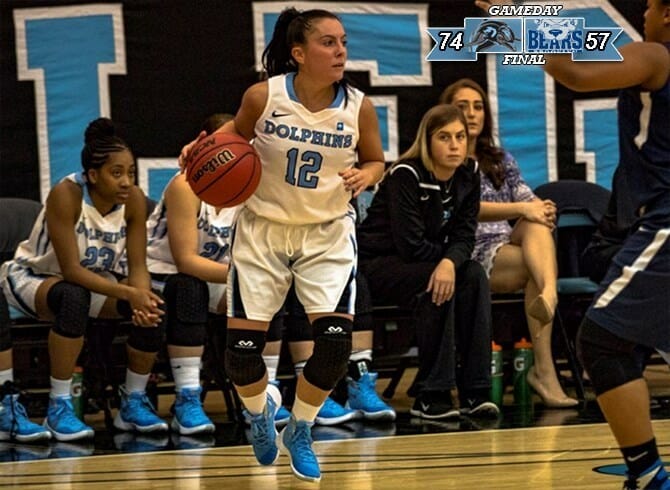 The College of Staten Island women’s basketball team used a suffocating defense that held their opponents to just 25% shooting for the game, to score a lop-sided, 74-57, win over St. Joseph’s College of Brooklyn, as part of non-league play in Brooklyn, NY.  The Dolphins advanced to 3-3 overall, while the Bears fell to 0-8.

CSI opened up a 9-2 first quarter lead, but SJC would finish the stanza on a 9-2 run to even things up.  Victoria Porcasi knotted things up for the Bears with just over a minute to go in the first as the Dolphins had their problems, misfiring on their last five shots of the quarter.

After trading baskets to open up the second period, SJC took their first lead when Porcasi hit another three to stake the home squad to a 20-18 lead.  From there, however, CSI found their rhythm, and ended the final 7:57 of the quarter on a 20-8 run.  Jamie Pifalo gave the Dolphins the lead back, 22-20 at 6:23, and then three-point bombs by Angelique Price and Christina Pasaturo extended the lead further.  CSI led 38-28 at the half.

The lead expanded in the third frame, as a Flecker jumper and Pasaturo bucket gave CSI their biggest lead at 47-30 with 6:09 to go.  After SJC pecked away, CSI caught fire again, and a jumper by Pasaturo gave CSI another huge lead, 56-36.

From there, CSI was on cruise control, and used tenacious defense to seal things up, never allowing SJC to come to within 15 points, while at times pulling ahead by as much as 23.

CSI will next be in action on Tuesday, December 8, when they travel to face Baruch College to extend CUNYAC play, at 5:30pm.