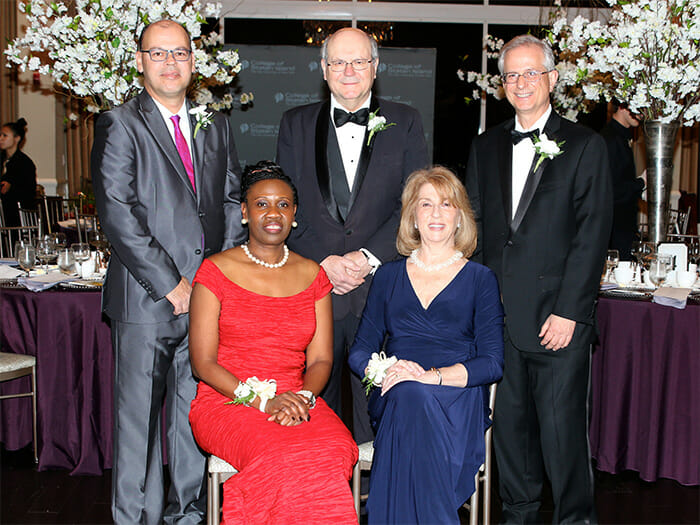 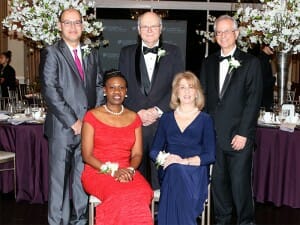 Enthusiasm was in the air as faculty, staff, students, alumni, and friends of the College of Staten Island broke attendance and contribution records, last December, at the Sixth Annual Celestial Ball. The gala event, which took place at the Richmond County Country Club, was hosted by the CSI Foundation.

This year’s Ball honored with the President’s Medal notable citizens who have made significant contributions to CSI and our community. The honorees were Edward Burke, Dr. Christine D. Cea ’88, Cesar J. Claro, and Dr. Wilma L. Jones. After he received his award, Mr. Claro graciously presented a $250,000 check to the College on behalf of the Richmond County Saving Foundation.

As state funding for higher education in New York State continues to decrease, Khatmeh Osseiran-Hanna, CSI Vice President for Institutional Advancement and External Affairs, emphasized the goal of the evening to the record number of attendees when she began the festivities by comparing the Ball to the new life that comes each spring. “The Celestial Ball is much like that waking spring in providing crucial renewal of programs and scholarships for our students, dollars for faculty research, and funds for improvement of our campus.”

View the many gracious sponsors who made this event possible>

CSI Foundation President Sam Farag explained the vital role that the Foundation plays at the College and expressed his gratitude to the Ball’s attendees. “Our mission at the CSI Foundation is to secure philanthropic support for CSI to reach its highest level of academic excellence as one of CUNY’s senior colleges and the institution of public higher education in the Borough. As the success of the CSI Foundation, and the College, is rooted in the generosity of the College family and the Staten Island community, I’m grateful that you are all here tonight.”

CSI President Dr. William Fritz highlighted the College’s vast achievements, its growing national recognition, and its increasing reach. “The College has always served its students and its community, but today, that potential is limitless, thanks to recent advancements to our academic programs, our extraordinary faculty, and our beautiful, 204-acre campus. This potential drives the success of our students who are making the College of Staten Island a destination campus. Our student body is comprised not only of people from the Island, but from the other boroughs of New York City, from states across the U.S., and from countries around the world.”

That impact was further underscored by student speaker RinZhi Larocque who compared her metamorphosis at CSI to the College’s mascot, the dolphin. “Like dolphins nurture their young, CSI has nurtured me by giving me opportunities to improve my English through the CUNY Language Immersion Program, and allowing me to do research in the biology lab, as well as be part of the prestigious Verrazano School honors program at CSI, which has prepared me, very successfully, to apply for dental schools.”

This year’s Ball, which raised more than $100,000 in student support included a live and a silent auction, where attendees competed for prizes such as a painting donated by 101-year-old alumna Margaret Ricciardi and a guitar signed by Richie Sambora of Bon Jovi, among many other wonderful items and exotic getaways. 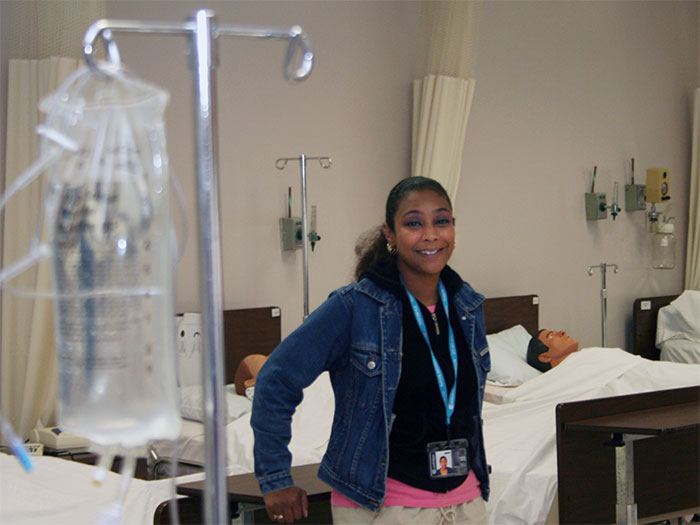