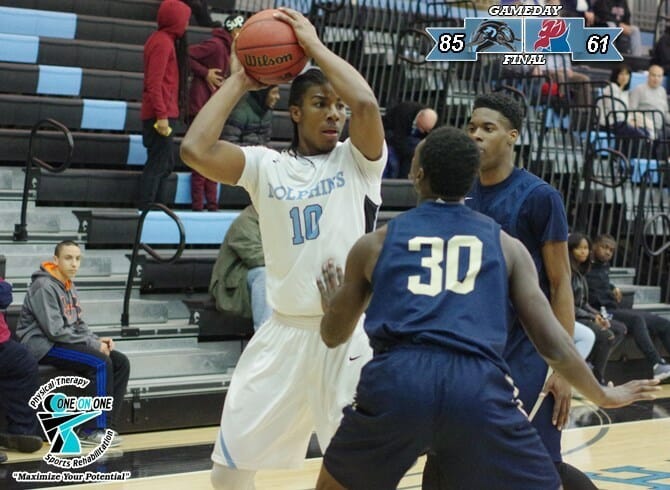 The College of Staten Island men’s basketball team used an improbable and explosive, 26-0, run in the final 9:23, to storm past FDU-Florham as part of non-conference play in Madison, NJ, this evening, breaking a two-game slide.  The Dolphins lifted to 9-4 overall with the win, and handed the Devils their fifth straight loss, dropping them to 3-10 this season.

The 26-0 close left many stunned after a game that otherwise was back-and-forth through the first 30 minutes, complete with eight ties and 9 lead changes.  The home squad had a 61-59 edge after a Jayson Hughes bucket with 9:23 to go, but it was all CSI from there, as the Dolphins buried 10 of their last 15 shots, holding FDU to 0-12 from the floor.  The Devils also missed four free-throws in the stretch and committed a pair of turnovers.

“I wasn’t aware of that,” CSI Head Coach Tony Petosa said of the numbing run to end the game.  “We really struggled to score in the second half of our last game (against CCNY) and the better part of this game.  We made a little run to break away in this one and we were able to put the game out of reach with some big baskets and better defense.”

The game seemed destined for a tight finish given the first 30 minutes.  CSI led for most of the way in the first half, but rarely by more than five points.  A Will Fonseca jumper gave CSI a 13-8 lead just over five minutes in, but in a recurring theme, FDU would have a response, as Steve Herdman responded with a three.  The teams would trade baskets from there, until another Herdman three-point play the hard way gave FDU a 24-22 lead with 9:13 to go in the stanza.  Kevon Murphy then went on a personal five-point tear, and a couple of free-throws by Frank Schettino gave the Dolphins their biggest first half lead at 30-24.

FDU did have the last laugh of the first half, as two Donte Ali free-throws started an 8-2 run to finish the half, ended by an Alex Hanssen jumper to give the Devils a 39-38 halftime edge.

The Devils led by as many as a trio to start the second frame, until a three by Edin Bracic and three-straight free-throws by Vincent Dacunto gave CSI back the lead.  FDU would come back to tie the score three times before taking the lead again on an Ali lay-up at 11:25.  The lead changed hands another three times in the final three minutes.  The final time came at exactly the 9 minute mark when Fonseca buried a three to give CSI the 62-61 edge.  Hughes missed a three and CSI’s Gregory Civiletti cashed in the other way with a quick two.  FDU immediately asked for time, but after another miss, Murphy scored another off of an offensive rebound.  FDU proceeded to turn the ball over and after a foul; Dacunto buried a pair of freebies.  After another FDU miss, Khaleeq Baum scored on an inside drive at 6:34, and from there, CSI slammed the door, scoring the next 15 points en route to the resonating win.

Fonseca led all scorers with 28 points to go with 9 rebounds, while Khaleeq Baum added 13 points and 12 rebounds, and Murphy 12 for the Dolphins.  Ali finished with 19 for the Devils and Herdman tallied 17.  CSI was a minus-one in the turnover column but owned a stellar 54-32 edge on the glass.  The Dolphins are 6-0 this season when out-rebounding their opponents.  The Dolphins’ bench outscored FDU, 49-10.

CSI will return to action on Saturday, when they host Lehman College at 3pm at the Sports & Recreation Center.