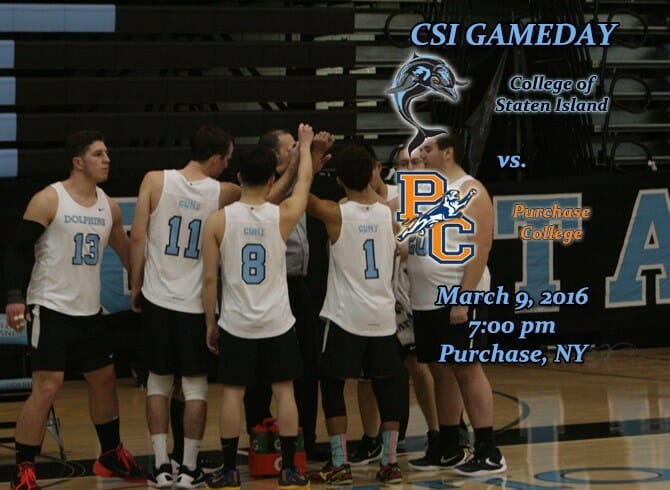 The College of Staten Island men’s volleyball squad will take to the road tonight to take on Purchase College in Purchase, NY in hopes to break their five match losing skid.  The Dolphins are coming off a pair of losses in a crucial CUNYAC multi-match which saw the Dolphins take on Hunter College and York College.

CSI vs. PURCHASE COLLEGE AT-A-GLANCE
Matchup:  CSI (4-12 overall, 2-7 CUNYAC) vs. Purchase College (9-11 Overall, 4-6 Skyline)
Where:  Purchase College  –  735 Anderson Hill Rd, Purchase, NY
First Serve: 7:00pm
All-Time Series: First Meeting
Last Year’s Result:   Did Not Play
Players To Watch (CSI):  Justin Edwardsen and Danil Kukovitskiy have been the attacking duo for the Dolphins this season with 98 and 88 kills, respectively.  Brandon Lei does well to find them and set them up for the best possible attack to help his team win. Newcomer Khaleeq Baum tallied five kills through two matches after not playing volleyball in over two years.
Players to Watch (PC):  Kevin Carges and Riley Damerell have crushed opponents to the tune of 157 and 134 kills, respectively this season.  Andrew Schwab has allowed the Panthers’ attacking duo to have such great success by placing the ball in the right spot for an easy kill and has been awarded 276 assists for his efforts.
News and Notes: This is the first meeting between these two programs and will likely be a matchup to watch moving forward. Purchase played against Brooklyn College and swept them 3-0 where as it took Staten Island five sets to topple the Bulldogs.  Another common opponent between the schools is Keuka College in which both teams lost but the Panthers were able to steal a set from Keuka in a 1-3 loss.  Tonight’s match will be the third in a five match road stint for the Dolphins before eventually returning home on March 17 where they will take on Hunter College.