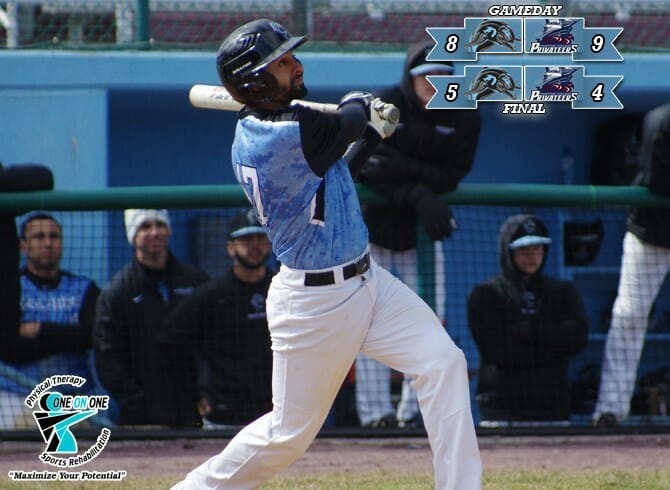 The College of Staten Island baseball squad managed the cold weather enough to garner a non-conference doubleheader split with visiting SUNY-Maritime this afternoon at the CSI Baseball Complex.  The split gave the Dolphins an 8-5 overall mark, while the Privateers advanced to 9-3 overall.  The games both featured feverish comebacks that fell short, as the Dolphins scored five runs in the bottom of the seventh inning in game one only to fall, 9-8, while the Privateers scored two in their final inning of game two before falling, 5-4.

In the opener, the teams went into the final two innings of play tied 2-2 before the bats broke out to the tune of 13 runs in the sixth and seventh innings.  Maritime struck first in the third inning, plating two runs off of starter Tom Musso on a Chris Deddo two-RBI double to open the scoring.  It took CSI some time, but the Dolphins got even in the fifth inning off of Maritime starter Tyler Stuart, when catcher George Kantzian continued his torrid pace at the plate, doubling in Frank Sconzo and Nick Delprete.

The Dolphins then got in trouble in the sixth.  As the Privateers loaded the bases and chased Musso for reliever Jason Failla.  A costly infield error allowed two runs to score from there, and a Joe DiLeo two-RBI single opened the Maritime lead to 6-2.  CSI pecked away and scored a run in the sixth, but the Privateers responded with another three runs in the top of the seventh, taking a commanding, 9-3, lead.

That’s when CSI rifled up what was almost an incredible comeback.  Two walks and a single by Glenn Glennerster got CSI down to 9-4, and another walk to Francis Munoz loaded the bags.  DiLeo then came in to pitch for Maritime, but he promptly gave up a two-RBI single to Phil Ciprello, to bring CSI to within 9-6.  After an out, Delprete lined a single scoring another run, and then Frank Sconzo laced a sac fly to score Ciprello to make it 9-8.  With two outs, the Dolphins wanted to move the game-tying run over to second base, but Delprete was caught stealing on the following play, ending the game just short of the full comeback.

Musso took the loss for CSI, allowing four runs (three earned) in 5.1 innings, fanning five and walking four.  Stuart recorded the five-inning win, allowing two runs on just four CSI hits.  Both teams registered eight hits in the opener.  Delprete finished 3-4 from the dish with an RBI and run scored, while Brian McLaughlin finished 3-4 with a run scored for Maritime.

In the second game, both teams fell into early trouble before settling down.  Maritime pressured first, pushing across a couple of runs in the first inning starting the game with four singles and a walk, going up 2-0.  The Dolphins needed a break, and got one in the form of an inning-ending triple play.  With the bases loaded, Bruce Tyler laced a shallow fly into left field.  Making the play was Glennerster, who immediately relayed the throw home to a waiting Frank Sconzo, who made the tag easily on Deddo at home.  Recognizing Stephen Semler trying to advance from second to third, Sconzo whipped in a throw to Chris Moran, who applied the tag to end the inning in grand fashion.

The big play parlayed into a big inning for CSI, as they were able to cut across three runs against Maritime starter Alex Poliwoda.  Joe Palmeri scored a big two-RBI single, scoring Delprete who had singled to start the game, and Sconzo, who doubled Delprete over to third.  Palmeri would then come around after an advance and a Glennerster RBI-groundout.

While CSI starter Christian Capellan settled for the Dolphins, CSI was able to push across another pair of runs in the second inning, this time on a Sconzo two-RBI single scoring Delprete and Bobby Drake.  CSI got all the scoring they would need, taking a 5-2 edge.

After registering two one-two-three innings, Capellan was able to get out of a two-runner jam in the fifth and sixth innings, setting up for the final inning.  Capellan was left in the game and immediately got two quick outs before Maritime staged their rally.  After a single and a hit batter, Capellan gave up a two-RBI double to Deddo, leaving the game-tying run at second base with two out.  After a visit to the mound, Capellan stayed on the hill and after a few heavy swings, he was able to get Semler to pop a lazy fly ball into centerfield, ending the game.

For Capellan, it was his second complete game win of the season, as he would allow four earned on eight hits, fanning four.  Poliwoda took the loss, allowing five runs on eight hits through five innings.  CSI again got three hits from Delprete, who finished 6-8 from the plate, adding two runs scored in game two.  Sconzo finished 2-3 with 2 RBI.  Deddo went 3-4 at the plate for the Privateers, adding three RBI.

CSI upped their all-time record against Maritime to 9-6, and ended the Privateers four-game win skein with the game two win.

?The Dolphins will be back in action on Tuesday, March 22, when they host William Paterson University for a single, non-conference, contest at 4pm at the CSI Baseball Complex.