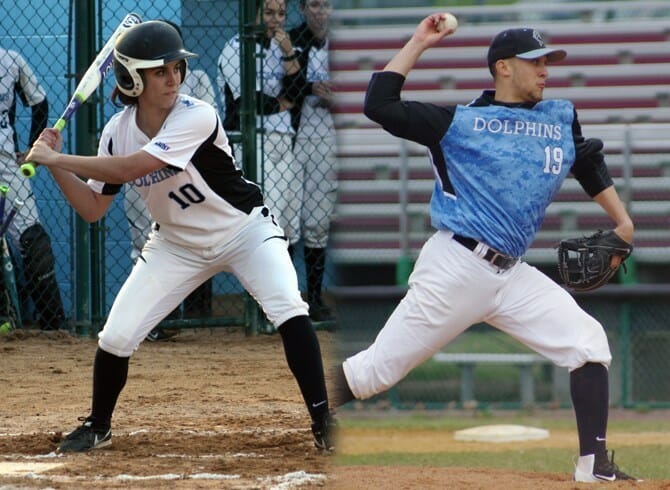 The College of Staten Island baseball and softball squads celebrated a heavy work week with a foursome of awards that included a clean sweep on the softball side.  Senior Christina Tufano took Player of the Week honors after a record breaking turn this week, while Antoinette Galbo took Rookie of the Week.  CSI also earned a pair of Pitcher of the Week awards with Jacqueline Cautela on the women’s side and Christian Capellan on the men’s side earning honors.

No stranger to success, senior third baseman Christina Tufano has been lighting up the record book of late and this week alone the senior improved on her career RBI record while also setting school highs in hits and doubles.  For the week, Tufano smashed 16 hits in 34 at-bats, good for a .471 clip over 10 games last week.  She added five doubles, two triples and a home run, good for a .824 slugging percentage.  She tallied 14 RBI and 15 runs scored and was started every game on the hot corner.  For the season, Tufano is tops on the squad with a .411 batting average, leading the way in hits (39), RBI (31), and slugging percentage (.674).

Galbo earned her second Rookie of the Week honor is similar high fashion.  Galbo batted a crisp .333, tallying six of her 10 hits this week over the weekend, finishing the week with a pair of doubles, a triple, and a homerun, inside-the-park.  She also stole four bases this week and registered 14 assists at shortstop.  For the season, Galbo is batting .312, pacing the Dolphins with 10 stolen bags and five sacrifice bunts.

Back-to-back CUNYAC Pitcher of the Year Jacqueline Cautela earned another nod for her pitching efforts this week, although she lit it up at the plate too.  Cautela went 5-0 in the circle for the Dolphins this past week with an impeccable 0.23 ERA.  She tossed 30 innings surrendering a single earned run and 10 hits while fanning 30 batters.  She allowed just three extra-base hits and a single wild pitch over the body of work as well.  The week lifted her overall record to 11-4 this season with a 1.40 ERA.  She leads the Dolphins with 90 innings pitched, 13 complete games, 84 strikeouts and opponents are batting just .185 against her.  For extra measure, Cautela batted .515 last week with 9 doubles a homer and triple.  She tallied 12 RBI and 16 runs scored with an enormous.939 slugging percentage.

Over on the baseball diamond, Capellan impressed as well in a lone start and a relief appearance.  He registered a 1-0 record on the week, earning a complete-game winner over CCNY on Saturday, tossing a five-hit shutout, fanning two.  For the week, he posted a 1.12 ERA, lifting his overall record to 4-1 with a 3.61 ERA, notching four complete games and 29 strikeouts.