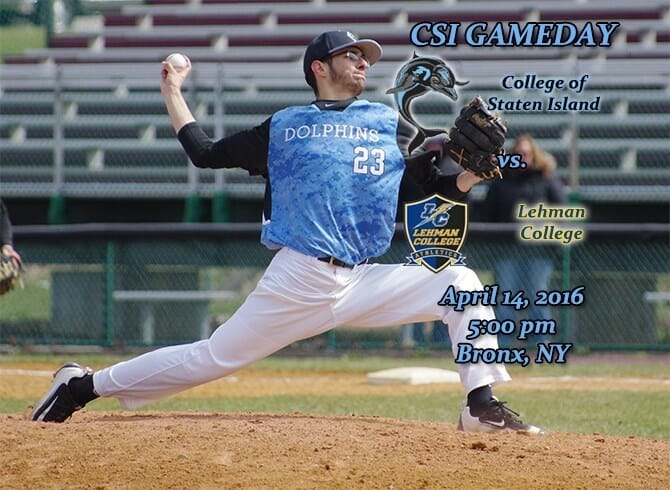 The College of Staten Island baseball team will take part in their first CUNYAC doubleheader of the season today against Lehman College in the Bronx, NY at 5:00 PM.  The Dolphins were able to pick up their second win in a row yesterday when they took on Mt. St. Vincent.  The Dolphins’ conference start has been delayed by an abundance of cancelations due to rain and poor weather.

CSI vs. NEW JERSEY CITY UNIVERSITY AT-A-GLANCE
Matchup:  CSI (13-9 Overall, 0-0 CUNYAC) vs. Lehman College (7-16 Overall, 1-1 CUNYAC)
Where:  Lehman College South Field – 250 Bedford Park Blvd West, Bronx, NY
First Pitch: 5:00 pm
All-Time Series: CSI leads 73-25
Last Year’s Result:   CSI won all three, 14-0, 13-9, 11-8
Players To Watch (CSI):  George Kantzian looks like he’s returned to his early season form after coming off of a game where he went 4-for-5 with three RBIs and two doubles in the 10-6 win over Mt. St. Vincent.  Kantzian has also adapted to his new role nicely over at first base after transitioning there from catcher midway through the year.  Joe Palmeri has been consistent from the plate this year and is coming off of a 3-for-5 night with two RBIs and a pair of runs.
Players to Watch (LC):  Carlo Francisco will be the player that the Dolphins will want to avoid when he comes to the plate.  Francisco is hitting .409 on the year and has three homeruns, a team high, as well as 14 RBIs to his name. Batting slightly less is Natanael Toribio with a .378 batting average but is leading the Lightning with a .465 on base percentage.
News and Notes: The Dolphins will come into tonight’s doubleheader on a seven game win streak against the Lightning.  When Staten Island plays Lehman at Lehman College they have a 36-10 record against them.  Over the last seven games against the Lightning the Dolphins have outscored them 73-30 and will look to extend that mark tonight.  CSI will also start their CUNYAC title defense today after a delayed start due to poor weather.