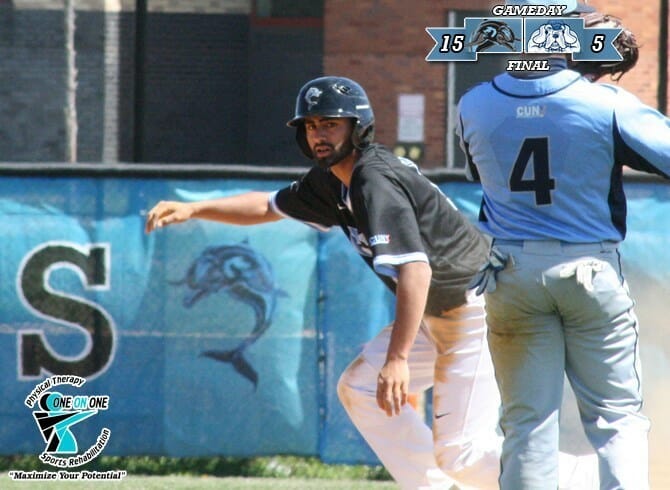 The College of Staten Island ended the weekend by taking the final game of a three-game set with John Jay College, overpowering the Bloodhounds for a 15-5 win as part of non-conference play at the CSI Baseball Complex.  CSI lifted to 18-9 with the win while the Bloodhounds fell to 9-21.

In a game that featured 20 runs, 27 hits and seven errors, CSI claimed an opening 4-0 lead after two frames, providing nice cushion for starter Juan Rodriguez.  A George Kantzian RBI double highlighted a three-run first stanza, while Glenn Glennerster added a base hit for an RBI as well, scoring Kantzian.  In the second, an infield single by Nick Delprete against John Jay starter Joe Gregory, made it a 4-0 game.

The Bloodhounds were able to chip away with two runs in the top of the fourth inning helped along by a pair of CSI errors and a sac fly from Brandon Thomas.  The Dolphins, however, came right back when a Joe Palmeri long fly ball went off of the glove of Brian Cabral, allowing two CSI runs to score in the bottom of the stanza.  CSI added another run to make it 7-2 after four innings.  One inning later, CSI roughed up JJC reliever C.J. Meyer for four runs, highlighted by a Josh Mercado RBI double followed by a RBI triple for Anthony DiMarco.  That ballooned the lead to 11-2.

From there, both teams got plenty of reserve players into the game.  The Bloodhounds threw a wrench into play by putting up three runs in their turn of the seventh against CSI reliever Gerard Esposito, but CSI got it back and then some with two runs in both the seventh and eighth innings.  Frank Sconzo powered in a two-RBI double in the seventh, while Greg Manassa’s 2-RBI pinch-hit single did the damage in the eighth.  CSI’s Jason Failla came in to pitch a scoreless pair of innings in relief in the non-save opportunity.

CSI out-hit JJC, 15-12, with Glennerster finishing 3-4 and Sconzo going 2-3 with a pair of RBI, walks, and runs scored.  Rodriguez earned the win after 5.1 innings of work, allowing just two runs (one earned) on eight hits with two strikeouts against no walks.  Gregory took the loss, allowing seven runs (three earned) on five hits in four innings, Cabral went 4-5 at the dish with a RBI and a pair of runs scored for JJC.

Up next for CSI will be the 13th Annual Grace Hillery Breast Cancer Awareness Night on Tuesday, April 19, at 7pm against Drew University.  The annual event raises funds and awareness for breast cancer research.