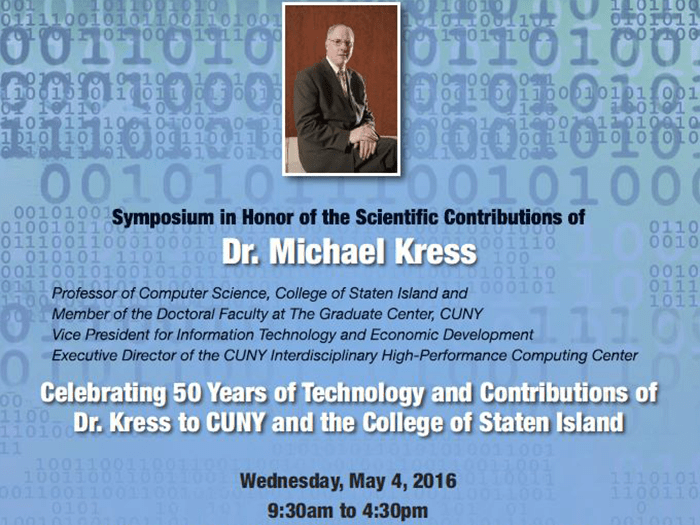 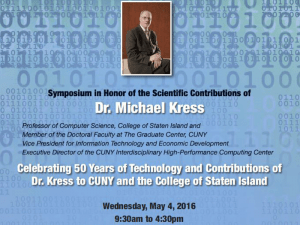 In 1968, a young research assistant was hired at Richmond College to make the first scientific computer in all of The City University of New York (CUNY) work. Stretching approximately 12 feet in length, the IBM 1130 received input through punch cards (a piece of stiff paper that contained digital information represented by the presence or absence of holes in predefined positions) and required technicians to read the computer’s blinking lights to determine how the system was processing.

Today, Vice President Michael Kress, a native Staten Islander residing in West Brighton and renowned College of Staten Island (CSI) faculty member and administrator, looks back on his 50 years of service to the College as well as Staten Island and is inspired and awed at how much technology has advanced.

“The IBM 1130 had only 16 kilobytes of memory. The iPhone, for example, has four gigs!” he said, explaining that there is almost a billion times more memory in a smart phone than in the IBM 1130.

The College-wide event will take place on May 4, 2016 from 9:30am to 4:30pm at CSI in the Center for the Arts (Building 1P). A dinner reception will follow at The Vanderbilt at South Beach. Guests must register in order to attend both the Symposium and the dinner at www.csi.cuny.edu/computingsymposium

President Fritz applauded Dr. Kress, a graduate of Staten Island Community College and Richmond College, for his commitment to the College of Staten Island over the last half century, commenting that the upcoming Symposium is “yet another milestone that highlights the historic achievements of CSI faculty and serves as a reminder of where we have been and the exciting and challenging places in the spheres of education and technology that we are moving towards.”

The Symposium program includes remarks from colleagues in a variety of areas that Dr. Kress has positively influenced, including people with disabilities, environmental modeling, transportation modeling, and interdisciplinary applications.

Longtime colleague Maryellen Smolka, formerly of the Center for Student Accessibility’s (CSA) Resource Center for the Deaf and Hard of Hearing, commended Dr. Kress for being “a man that thinks positive and looks at everything as an opportunity. Dr. Kress is successful because he knows that autonomy is a gift, so that when he delegates responsibility, he expects results.”

Dr. Kress was instrumental in establishing the Resource Center for Deaf and Hard of Hearing, with the support of the late Senator John J. Marchi, the late Assemblywoman Elizabeth Connelly, and then Assemblyman Eric Vitaliano, now U.S. District Court Judge for the eastern district of New York.

Smolka and Dr. Kress worked on several projects together including the Communication Access Realtime Translation (CART) services for students who are deaf or hard-of-hearing, electronic note-taking, and closed captioning for CUNY.

“Those projects are really special to me,” Dr. Kress said in reference to his extensive work with students with disabilities.

Smolka fondly recalls that, “Dr. Kress inspired our team because he saw the passion we had for our work. He told us the truth, even when it wasn’t what we wanted to hear. He encouraged us to grow and in turn, we were more productive.”

“I don’t know if I would have ever imagined in my wildest dreams that we would be where we are today in terms of computers,” Dr. Kress commented. “Computational power is not just in computers but it’s all over because everyone has a smart phone. It goes to show you how much our society has become dependent on technology,” he said, stressing that in 1968, “we could live without it! Today, we can’t.”

Over the past five decades, Dr. Kress has led the College through a transformative process of technology advancement and scientific research. One of the College’s newer computers, the Cray, costs 78 times more than the old IBM, has 2,816 more CPUs, 352 million times the amount of memory, and 130 million times the amount of disk space. The College’s newest computer, named Appel, has even more computational power.

As an administrator in the 1990s when the College moved to its current Willowbrook location, Dr. Kress catapulted the College from “having no computers to having computers everywhere.” At the new campus, Dr. Kress was charged with setting up the first networks and the computer labs, as well as leading the development of the Smart Classrooms. “The integral pieces that are now almost second nature in terms of technology on campus did not exist when I started in my role,” Dr. Kress remembers.

The Vice President is certainly proud of the digital progress at CSI, but pointed out that his career is “first as a professor, a researcher, a scientist, a person whose motivation is to solve problems and work with students and faculty to make a better world.”

In addition to his vast work in higher education, the Dr. Kress has worked closely with CSI faculty on research that has directly impacted Staten Island. He noted earlier studies that he performed on the hazards of the liquefied natural gas tanks in Rossville, studies that ultimately led to the tanks closing.

Further utilizing his expertise to help “make a better Staten Island,” in the wake of Superstorm Sandy, Dr. Kress, in collaboration with CSI President William J. Fritz and Dr. Alan Benimoff, has published a number of papers on the storm surge impact on Staten Island and how to make the borough safer and more protected in case of future hurricanes.

“Those projects have made a difference for Staten Island because we brought the expertise of the College to work on and understand problems that were real risks to Staten Island,” he said.

Other recent initiatives in economic development spearheaded by Dr. Kress in big data analysis have generated more than $15 million in capital funding for the CUNY Big Data Consortium and $500,000 for the CSI Technology Incubator.

He has a unique connection to the College as an alumnus who earned his associate’s, bachelor’s, and master’s degrees from CSI’s predecessor institutions, Staten Island Community College and Richmond College.

To further celebrate the distinguished career and years of outstanding service to CSI and Staten Island, a scholarship fund has been established in his honor. The Michael Kress Scholarship Fund in Interdisciplinary Computer Science will be a merit-based scholarship, supporting outstanding students in interdisciplinary fields as they relate to computational study.

As Executive Director of the CUNY Interdisciplinary High-Performance Computing Center (HPCC), a major hub for data-driven research and beyond, Dr. Kress has also provided scholarship and leadership for many initiatives at the College of Staten Island and CUNY. He notably championed and led the establishment of the HPCC.