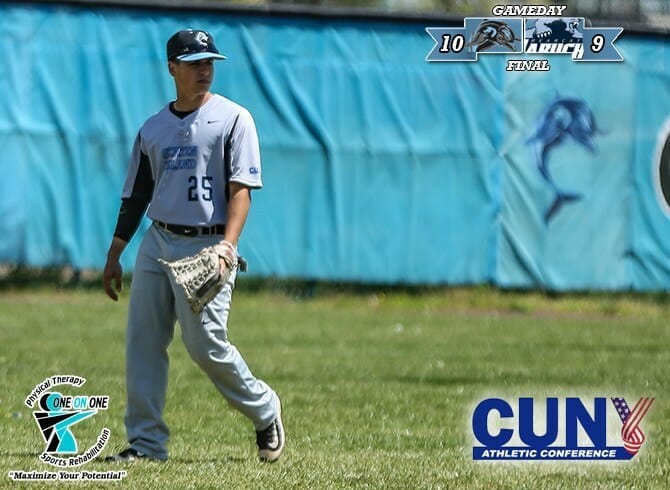 The College of Staten Island baseball team eagerly awaited for 4:00 pm to take on their CUNYAC rivals Baruch College in game two of today’s CUNYAC Championship Tournament.  The Dolphins watched the Bloodhounds get eliminated in game one of the day after Lehman defeated them 3-1.  The cardiac kids also known as the CSI baseball team would once again not make it easy on themselves.  The Dolphins trailed the entire game before making yet another improbable comeback, much like the one in last year’s final.  The Dolphins faced a five run deficit in the bottom of the ninth but were able to overcome the odds and tie the game up and force extra innings.  CSI didn’t come this far to lose the game and would go on to win 10-9 in dramatic fashion.  CSI moves to 25-13 overall and will now play in the finals tomorrow afternoon at the CSI Baseball Complex.

Glennerster would finish the game 4-for-4 with a run and three RBIs while Delprete would go 3-for-6 with two runs and a single RBI.  Failla would pick up his first win of the season and move to 1-1 overall.

Baruch College would be the first ones on the board after scoring two runs in the first inning.  The Dolphins however, would not allow the Bearcats to blank them as they would go on to score two runs of their own in the bottom of the first.  The Bearcats have fielded pretty well throughout the season with a .950% fielding percentage, however, errors would plague the Bearcats early in this game as Frank Sconzo would reach first on an error by Jasdeep Buttar at third base. Nick Delprete has led the Dolphins all year in hitting and put it on display this evening with a double which brought home Sconzo from second base.  Delprete would eagerly stand on second and await his chance to cross home plate.  Glenn Glennerster would bring Delprete home with an RBI single to left field to knot the game up at two.

The Dolphins would be held scoreless through the next three innings while the Bearcats were able to squeeze out a run in the top of the second inning to lead 3-2 all the way to the fifth inning.  Christian Capellan was given the ball to start the game on the mound and would give up the most earned runs he’s allowed all season after Baruch added three more runs in the top of the fifth to take a 6-2 lead. CSI wouldn’t be fazed as they are no strangers to playing from behind in big games.  CSI would shrink the Bearcats’ lead by one with a run of their own in the bottom of the fifth.

Staten Island would stay composed throughout the game even after they were down 9-4 in the bottom of the ninth inning.  CSI was in this same situation last year in the final and it took a walk off grand slam to complete the comeback win this time thing would play out differently but end up with the same result.  Staten Island had the top of the order start the ninth inning and were hitting well throughout the game.  Sconzo battled hard at the plate and would be walked for his efforts. Delprete, 3-for-6 on the day, would single to left field which moved Sconzo to second base.  Now, normally with a runner in scoring position Joe Palmeri has been the king of bringing them home this season.  The shortstop was able to make a nice grab but unable to make the play at first and allow Palmeri to reach first and load the bases with no outs.

Glennerster has been clutch all year for the Dolphins and would come up big once again with a two RBI sing to left center which erupted the crowd and swung the momentum to the Dolphins. Now, CSI trailed by just three runs with no outs on the board and a man on second and third.  It was at this time that the Baruch coaching staff decided that Cameron Kitt was running on empty and pulled him from the mound. Ryan Smith would go in for relief but would only face two batters as he would walk George Kantzian which would load the bases again.  Donovan Hunt was unable to secure the ball after Smith through a hard pitch which allowed the Dolphins to score on the passed ball.

Bobby Drake was subbed into center field in the top of the ninth inning and made his presence known with a crucial one out, two RBI double which tied the game up at 9.  Jason Failla would get the win for the Dolphins on the mound after shutting down the Bearcats in the 10th inning.  Frank Smith would be the hero of the afternoon when he drove in Sconzo for the game winning run with a single to right center.

CSI will play the winner of tonight’s game which is between Baruch College and Lehman College.