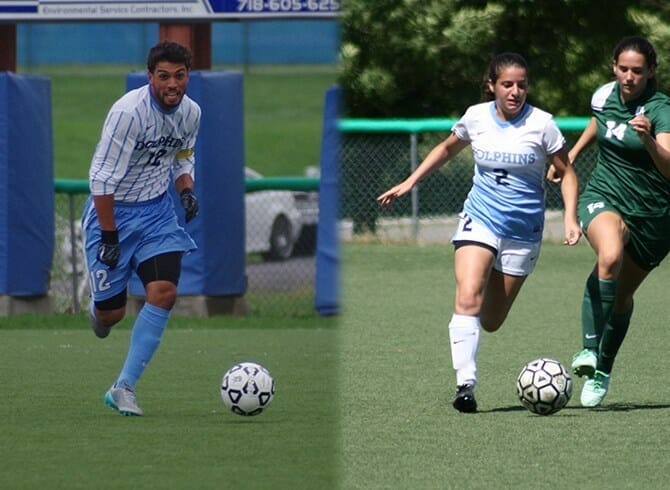 The College of Staten Island men’s and women’s soccer teams enjoyed a host of successes last year and the 2016 edition is one that is eagerly being anticipated.  With that in mind the programs officially released their 2016 dates of competition and the teams will be looking to pick up right where they left off in time for some great action on the pitch.

The CSI men will kick-off first, travelling to take on Farmingdale State on September 1, before welcoming in three teams for a Labor-Day Kick-Off Classic.  The men will play Purchase State and Yeshiva University on that weekend, part of a four-game home stand that continues the next weekend against Rowan University and PSU-Behrend.

On Saturday, September 17, CSI will face off against City College of New York at Randall’s Island, the scene of the 2015 Championship that saw the Beavers take a 2-1 overtime win over CSI when they last faced off.  The Dolphins will then return home for another seven-game home stand that covers nearly four weeks, a string that includes five CUNYAC contests and the school’s first meeting with Stevens Institute of Technology since 1990, on October 12.  Three straight road dates finalize the regular season, a string that includes the CUNYAC finale against John Jay College, who the Dolphins defeated in the CUNYAC Semifinals the year prior.

On the women’s side, the Dolphins officially get underway during the Labor Day holiday weekend, travelling to Northfield, Vermont, to take part in the Norwich University Kick-Off Classic, introducing play against Johnson State College.  The home opener to the season will be a few days later when the defending CUNYAC Champs take on Purchase College on September 7, and after a road date, the Dolphins return home a week later to introduce CUNYAC play against Lehman College in a rematch of last year’s Final, won by the Dolphins, 2-1, in double overtime.

October will feature a five-game home stand for the Dolphins, with four games coming out-of-conference, including a first-ever date with Stockton University on October 9.

The CUNYAC Tournament for both teams begin officially with Men’s Quarterfinal play on Wednesday, October 26, at the four highest-seeds of the eight-team tourney.  The women’s tournament features just four teams with play exclusively at Brooklyn College starting on November 2.  The Championships for both programs takes place on Saturday, November 5.  Last year marked the third time in history that both teams advanced to the CUNYAC Championship.

All CSI home games are FREE, will be broadcast live in standard HD via CSI SportsNet in 2016, and will feature live statistics as well.  You can also download official CSI Soccer Wallpapers that feature the 2016 schedules, located here.