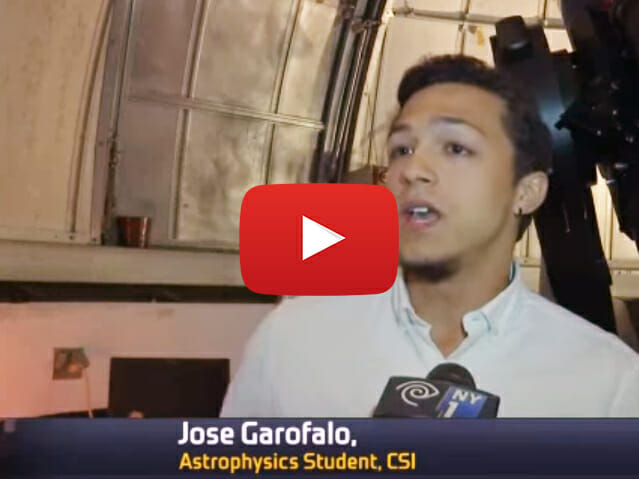 [youtube]http://www.youtube.com/watch?v=yOow2ae61xE&t=5s[/youtube]The Astrophysical Observatory at the College of Staten Island (CSI) has been a project magnet where undergraduates have explored various research inquires. Recent endeavors include monitoring solar flares as they hit the Earth, communication with geostationary satellites and polar weather satellites, and hunting and tracking dangerous asteroids, to name a few.

The current satellite project is led by CSI alumnus Karl Francis with student members of the Society of Woman Engineers and other STEM majors participating in the undertaking.

“As a professor who believes research participation for undergraduates is very important for their college experience, I have, over the years, helped launched numerous such projects,” commented Irving Robbins, Associate Professor of Engineering Science and Physics at CSI.

The project consists of a few phases. First is the construction of the satellite (students have used 3D printers to model aspects of it). Next, they installed electronics to monitor the satellite motion and rotational aspects. As the satellite, which will be in a decaying orbit, moves to its ultimate demise within a few months, notional data will be stored on board. The students are using the CSI Observatory’s nine-foot radio dish to track the satellite when it passes over Staten Island and collect the notional data of the satellite’s decay. The students are hoping that the data gained will help in the study of a serious problem of space debris, and they plan to send the data to NASA, as well as military officials and other agencies working on this issue.

Initial monies to buy the materials came from a PSC CUNY Grant and CSI Observatory funds. These funds will be used to pay for the launch from an island south of Fiji next year.

“Projects like this and the many others developed by CSI faculty not only are great motivators, but also help STEM-subject students get a first-rate education at our College,” Robbins said.