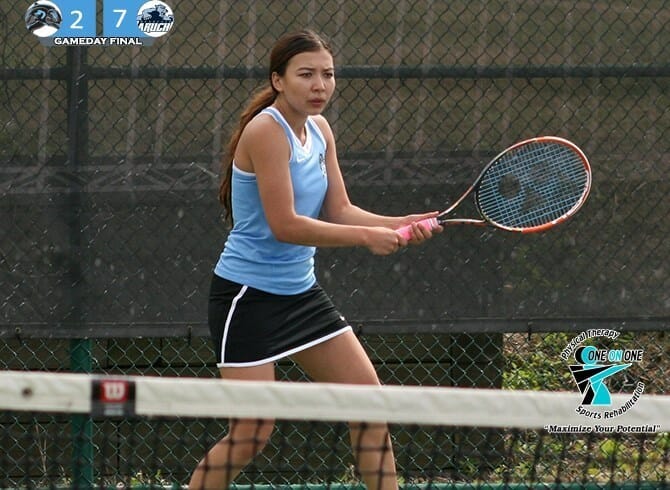 In a match between two undefeated conference sides, Baruch College got the better of the College of Staten Island, 7-2, as part of CUNYAC play at the National Tennis Center in Flushing Meadows.  The win lifted Baruch to 4-0 overall and 3-0 within the CUNYAC, while the Dolphins fell to 3-4, 2-1, respectively.

Play started with doubles and it was here that Baruch got started with a pair of solid and efficient wins.  In the pole position, the team of Allie Jackson-Hing and Isabel Arias, got the best of CSI duo Nozima Toshpulatova and Michelle Kushnir by an 8-3 count.  One flight down, the Bearcats pair of Hayley Bester and Shirada Tangirala looked overpowering in an 8-0 win.

CSI rallied back, however, with a very gritty win at the No. 3 spot.  Aziza Jurabaeva and Guetanie Romain outlasted Brooke Severance and Maria Scherbakova by a final score of 9-8, taking the tiebreaker by a score of 7-1.

Baruch responded by leaving little to chance in singles.  Needing only a split, they got five out of six wins.  CSI’s only win came in the No. 3 position, where Tristiana Adragna was dominating in a 6-0, 6-0, winner over Severance.  Baruch won all the other flights in straight sets.

The Dolphins will next look to rebound this weekend, when they host St. Joseph’s College (LI) at the CSI Tennis Center on Sunday, October 2, at 1pm.