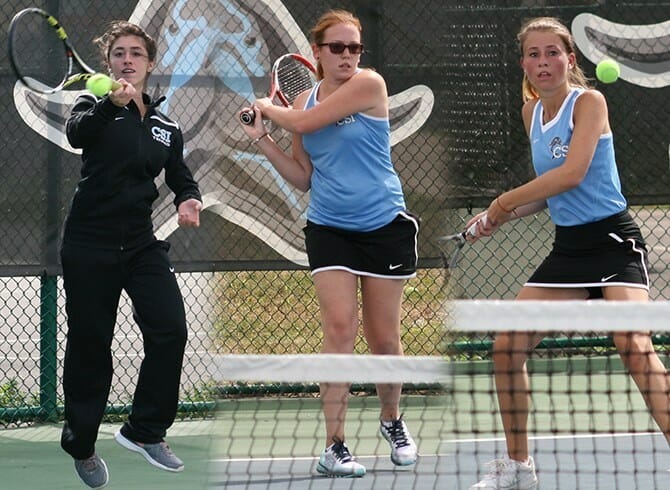 The College of Staten Island women’s tennis season finalized a week ago, but the Dolphins are still finishing strong, as they had three players named to all-star teams.  Freshman Tristiana Adragna, who doubles on the women’s cross-country unit, earned on to the City University of New York Athletic Conference 1st-team list of all-stars, while fellow frosh Dana Friedman and senior Michelle Kushnir were named to 2nd-team selections.  Teammate Guetanie Romain was named to the conference’s All-Sportsmanship team.

The choice for 1st-team all-star was a rather easy one for Adragna, who flourished in this, her initial season with the team.  Adragna played at Nos. 2-4 singles spots throughout the year, amassing a 10-4 record which at one point featured a seven-match singles winning streak.  In her usual No. 3 position, Adragna finished 6-2, and overall the first-year standout was a perfect 6-0 in CUNYAC play this year.

When play switched over to Doubles, Adragna merited a 7-7 record with five different partners, a mark that included a 4-2 mark as part of CUNYAC matches.

Decorated all-star Michelle Kushnir earned another in her final turn with the Dolphins this season.  Kushnir finished with a 5-8 overall Singles mark, but was a solid 5-3 at Nos. 2-3 Singles, a heavy step up in play than when she started at CSI at the bottom of the lineup.  Kushnir was also 5-9 in Doubles play with five different partners as well, but settled in nicely to finish the season strong and her leadership skills as team captain was on display the entire season.

One of Kushnir’s partners in Doubles was Dana Friedman who finalized on a terrific freshman campaign that saw her finish 4-5 overall in Singles play and 5-6 in Doubles fare with four different partners.  A majority of singles play was spent at Nos. 4-5 positions, but she also played three matches at the No. 3 position, where she finished 2-1 overall.

Rounding out the laurels was Guetanie Roman’s selection as an All-Sportsmanship player within the conference.  Romain’s sportsmanship was on display all season as she was a regular at practice and competition, constantly stepping into whatever role her coaches asked.  Along the way she compiled a 2-1 record in Singles and a 3-3 mark in Doubles.

CSI closed their season at 7-8, advancing to the CUNYAC Semifinals.  Lehman College enjoyed a clean sweep of the major awards.  No. 1 Singles player Sacha Espiritu was named CUNYAC Player of the Year while teammate Lizaveta Markouskaya was named Rookie of the Year.  Ana Belzunce was awarded Coach of the Year, representing the Lightning as well.