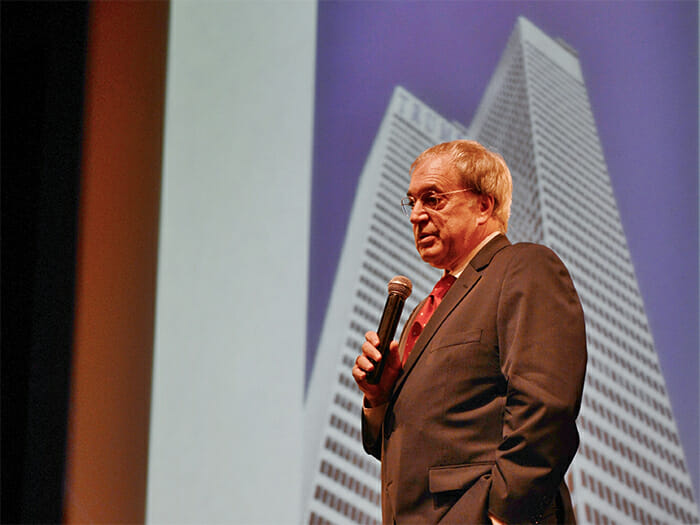 The School of Business at the College of Staten Island Hosts Noted Brand Strategist Robert Passikoff, Who Speaks About the Value of the Donald Trump Brand

Dr. Robert Passikoff, an award-winning brand strategist and analyst, and founder and president of Brand Keys, Inc., spoke to a crowd of more than 250 students, faculty, alumni and other guests at the College of Staten Island on November 9, 2016 – the day after Donald Trump was named the President-elect of the United States.

In her introduction of Dr. Passikoff, CSI School of Business Dean Susan Holak noted his pioneering work on consumer engagement and loyalty, resulting in the creation of brand indices for products, sports figures, and fashion.  Passikoff’s presentation touched upon aspects of marketing, communications, and consumer behavior, and underscored the importance of the emotional connections that consumers feel to brands.  He examined different types of brands and their impact on the value of the products with which they are associated, describing a spectrum from everyday commodities and services to luxury brands and so-called “human brands” like Michael Jordan – and, of course, Donald Trump.

Noting that he has followed the Donald Trump brand for more than 25 years, Passikoff stated several times that his studies and analyses carefully avoided a political focus.  Rather, they are aimed specifically on the Trump brand and its impact.  Dr. Passikoff used the example of an apartment building to illustrate how the Trump brand can affect the perception and price of a product, and then extended that discussion to show how the impact of the brand had changed at several crucial pre-and post-election moments.  Dr. Passikoff shared analyses that Brand Keys had performed overnight immediately following the election, which pointed to the increased value of the Trump brand following declines over the last several months.

A former advertising industry executive and professor, Dr. Passikoff ensured that the event was not only informative and entertaining but also an educational experience.  According to Mohamed Safa, Secretary of the CSI Marketing Association, the speaker had “a terrific sense of humor, and he gave us great insight into the future of analytical marketing.”  Numerous questions from the audience followed the talk.

CSI Provost Dr. Gary Reichard remarked upon the level of student engagement, stating that he thought “the number of questions that students asked indicated a high level of interest in the very timely subject.”

Several invited alumni returned to the College for the event, including Mallory Baio, the former president of the Marketing Association.  Baio said that it was the most interesting talk she had ever attended, and that she had arranged to be there because she still feels a sense of connection to the School of Business and to the College.  She was also able to reconnect with some of her former classmates, who were either alumni themselves or were serving as student ambassadors for the evening.