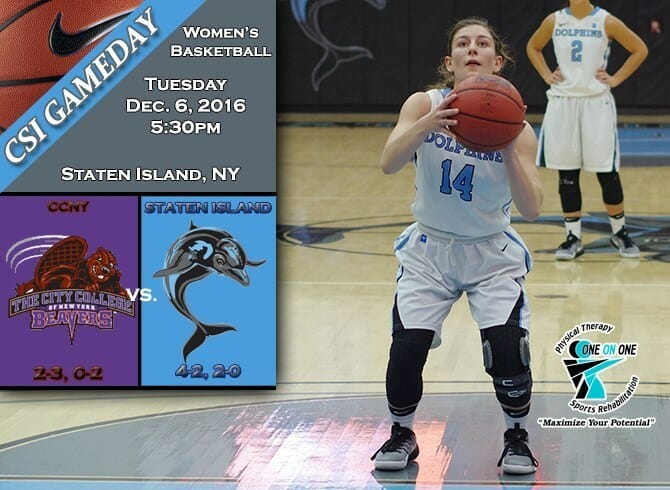 The College of Staten Island women’s basketball team remained perfect within CUNYAC play with their weekend win over York College.  CSI will look to increase their win streak to three games tonight when they take to the court against the intruding Beavers of City College of New York at 5:30pm.

CSI vs. CCNY AT-A-GLANCE
Matchup: CSI (4-2 overall, 2-0 CUNYAC) vs. CCNY (2-3 Overall, 0-2 CUNYAC)
Where: Sports & Recreation Center – 2800 Victory Blvd., Staten Island, NY
Tip-Off:  5:30 pm
Ticket Info:  $5 General Admission / FREE – CSI Students, Faculty & Staff
Promotional Info:  CSI Gameday Apparel Giveaway
Live Stats:  http://www.sidearmstats.com/csi/wbball/
Live Video:  www.csidolphins.com/csisportsnet
All-Time Series: CSI leads 36-22
Last Meeting: Feb. 2, 2016 – CSI lost 67-69
Players To Watch (CSI):  Christina Pasaturo was able to find her groove in the game against York College, pouring in a season high 27 points.  In that game against the Cardinals, Pasaturo shot a blistering 89% from the floor including 86% from three-point land. Samantha Flecker is second on the team in scoring with 14.8 ppg, and first on the team with 6.7 rebounds per game.  Angelique Price is one of the most efficient shooters on the team.  Price is shooting 44% from the floor and 42% from downtown, and has hit clutch shots when the Dolphins need to turn the tide in their favor all season long.
Players To Watch (CCNY): Erika Richards is the player the Dolphins need to keep their eyes on.  Richards leads her squad with 17.6 ppg and 11 steals.  Richards has been able to find open pockets within defenses so far this season and has exploited the weakness.  Beatrice Wallace has dished the rock well this season and is averaging 3.2 assist per game, a team high.
News & Notes: The Dolphins had a 27-game win streak, dating back to the 1997 season, over the Beavers snapped last season when the Dolphins traveled to CCNY and lost 67-69.  At home, CSI hasn’t suffered a loss against CCNY since Feb. 5, 1996. When Staten Island plays at the Sports & Recreation Center they are scoring an average of 74 points per game which is 2.5 points higher than their season average.  Prior to Sunday’s win over New Rochelle, CCNY was riding a three-game losing streak while losing by an average of 27 points. The Dolphins are ranked 9th in the nation in turnovers forced with an average of 27 a game.