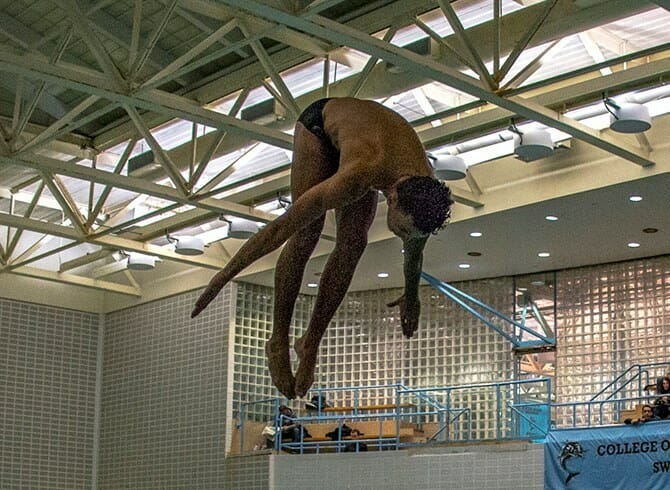 The College of Staten Island men’s and women’s swimming and diving teams enjoyed a very successful weekend meet at the Drew University Ranger Invitational, and for their efforts they were afforded a total of four weekly honors from the City University of New York Athletic Conference.  Senior Timothy Sweeney won Performer of the Week honors on the men’s side, while Omar Zaky took Rookie of the Week honors.  When it came to diving, the pair of Adil El Haddad and Nouran Abualam won in both the men’s and women’s division.

The CSI men places second in the Drew Invitational among six teams and Sweeney was a tremendous reason why.  He won all three of his individual events outright, a run that included CSI and CUNYAC records in the 100 Butterfly with a time of 49.81, and a CSI, CUNYAC, and NCAA B-Cut time in the 200-yard installment the next day with a time of 1:52.02.  On top of that, Sweeney’s legs in relay events were record-breaking as well.  His split in the 200-yard Freestyle Relay set a new CSI and CUNYAC record of 21.15, and then in the 800-yard Freestyle Relay, he did the same thing again with a 200 split time of 1:42.48.

For the year, Sweeney leads the Dolphins with 199 total points and he is a perfect 13-of-13 in first-place finishes in individual races this season.

Omar Zaky enjoyed good times as well this weekend.  Zaky is fifth on the team in overall scoring this season.  In individual races this weekend, Zaky earned a fifth place finish in the 200-yard Backstroke competition and had a pair of 8th-place finishes as well in the 100 Back and 200 Free races as well.  He was also a part of CSI’s third place 200-yartd Freestyle Relay quartet.

On the boards El Haddad was first in class, coming in first place at the Ranger Invite in both 1-meter and 3-meter competition.  On the 1-meter platform, El Haddad shined to win by over 12 points and he took the 3-meter competition by 14 points.  He is 8th on the CSI team in total points earned this season and is fifth on the team with eight Top 3 finishes in individual events.

In a very competitive diving competition at Drew, Abualam was best in show for CSI.  On the 1-meter boards she finished overall with a score of 132.20 and then places second overall on the 3-meter platform with a score on 139.50.  For the season she is 6th on the team with 62 total points earned and is tied for fifth with seven Top 3 finishes in individual events this season.