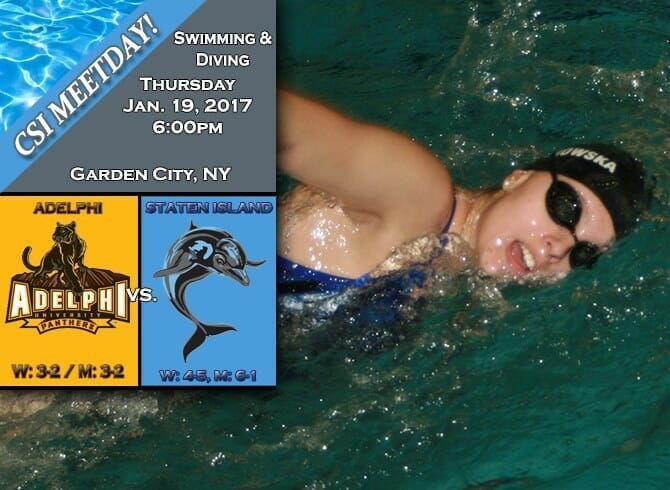 The CSI Dolphins have been busy of late and are winding down their regular season with a road meet tonight against NCAA Division II Adelphi University in Garden City this evening.  The men are winners of four-straight dual meets while the CSI women are looking to get back up to .500 after a weekend loss to Sarah Lawrence.

CSI VS. ADELPHI UNIVERSITY AT-A-GLANCE
Matchup: CSI Women (4-5), Men (6-1) vs. Adelphi University Women (3-2) Men (3-2)
Where: Center for Recreation & Sport – 1 South Avenue, Garden City, NY
Meet Time: 6:00pm
Swimmers to Watch (CSI): The Dolphins are coming off a busy week, and CSI senior Timothy Sweeney was superb, notching a clean sweep of wins in individual events and setting a new pool record in the 100-yard Butterfly.  Sweeney won his fifth CUNYAC Player of the Week award and freshman Omar Zaky was right behind him with his third Rookie of the Week honor.  He notched three individual wins and a silver medal last week and will look to have a strong outing tonight as well.  On the women’s end the Dolphins continue to be paced by top performances from Ewa Wojciechowska and Naomi Gaggi, along with Samantha Escobedo.  Nora Abualam is coming off of her fifth  CUNYAC Diver of the Week citation as well.
Swimmers to Watch (AU):  After strong performances at meets over the weekend, Rebecca Celorio of the Adelphi University track and field team and John Rotolo of the swimming and diving team have been named this week’s Legacy Advisors’ Players of the Week.  Celorio broke the school record, of 10:00.69 from 2014 held by Elizabeth Eickelberg (’14), in the 3,000-meter run at the Great Dane Classic on Sunday with a time of 9:59.19 to finish third overall. In addition, the mark was a lifetime best for the graduate student, and hit the NCAA provisional time. In a meet against Saint Rose on Sunday, Rotolo scored victory in the men’s 1,000 yard freestyle, posting a finals time of 10:45.28 to out-touch Saint Rose’s Liam Daniel by over a second and a half.
News and Notes: On the men’s side, the Panthers have won the last couple of meetings.  The Dolphins last win came on 1/14/14, when they took a 131-96 victory. It also marked CSI’s only win the series, as they are 1-4 against Adelphi all-time.  The women meanwhile have had an even tougher time, having never beaten the Panthers in their five all-time meetings against one-another.