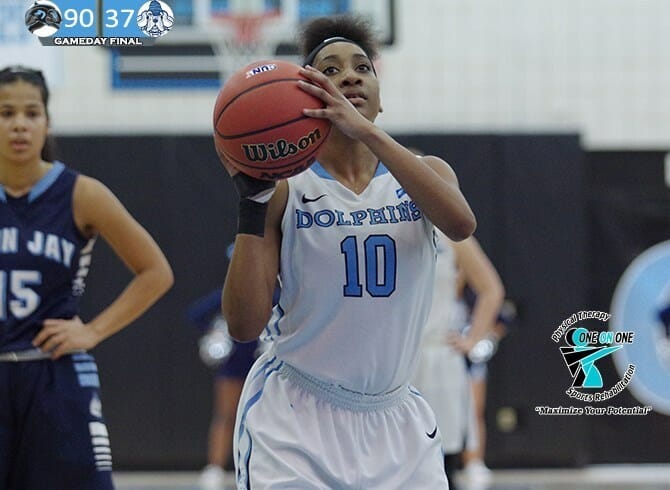 POSTGAME INTERVIEW – GAME FILM – The College of Staten Island women’s basketball team was locked in this afternoon at the CSI Sports & Recreation Center as they took on #6 seeded John Jay College in the CUNYAC Quarterfinal round.  The Dolphins cruised to a 90-37, their largest margin of victory this season. With the win the Dolphins improved their season record to 20-6 and will take on the #2 seeded Lehman College Lightning in a grudge match in the CUNYAC Semifinals at City College of New York.

Christina Pasaturo uses 54% shooting from the floor and a pair of three’s to once again put her over the 20-point mark for the 21st consecutive time this season.  Price was electric from the floor tonight, shooting 54% from the floor enroute to a 16-point outing.  Price also stuffed the stat sheet with six rebounds, assists and steals in 25 minutes of action.  Rosa Perone put together a nice stat line to finish the game with 12 points and 9 rebounds in just 18 minutes.

Jacquelyn Cali was able to get going in the second quarter, scoring four of her six points on back-to-back jumpers.  The Dolphins continued to find success as they were able to pick apart the Bloodhounds’ defense and find open lanes.  The turnovers continued to plague John Jay as the Dolphins were able to flip them into 10 points.

Crea would increase the Dolphins’ lead with a three-point basket to 40.  Staten Island would start to drain the clock before taking their shot to slow down the pace of the game.  The Bloodhounds were unable to make-up the deficit they found themselves in.

In the end the Dolphins’ offense was too potent for the Bloodhounds, whose season ends with a 5-22 record.

The Dolphins season continues on as they will play Lehman College in the CUNYAC semifinals at 8:00 pm at the Nat Holman Gym at CCNY.