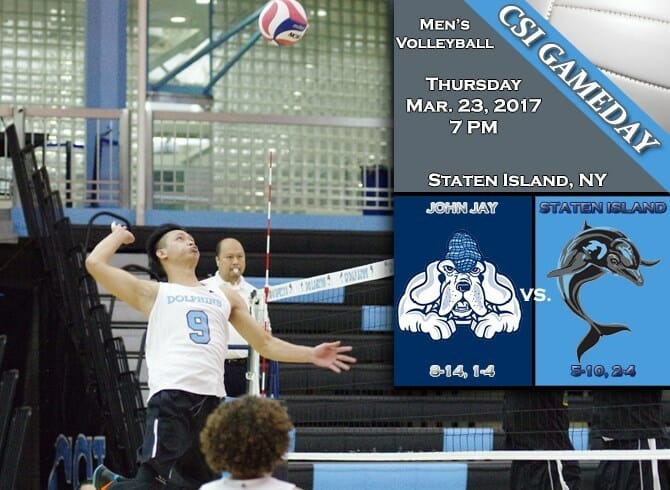 The Men’s Volleyball team is back on their home court in a conference match-up against the John Jay Bloodhounds at 7:00 pm. The Dolphins are coming off a 0-3 loss to Ramapo College and will look to bounce back with their first CUNYAC win against the Bloodhounds.

CSI vs JOHN JAY COLLEGE AT-A-GLANCE
Matchup: CSI (5-10 Overall, 2-4 CUNYAC) vs. John Jay College (8-14 overall, 1-4 CUNYAC)
Where: Sports & Recreation Center – 2800 Victory Blvd – Staten Island, NY
First serve: 7:00 pm
All-Time Series:  John Jay leads 4-0
Live Video:  www.csidolphins.com/csisportsnet
Live Stats: www.sidearmsports.com/csi/mvball
Players To Watch (CSI):  Mark Palencia continues his stand out season with a team-high of seven kills and one ace against Ramapo on Monday with a total of 125 kills and is ranked 33rd in the nation with 338 total attacks and averaging 7.86 attacks per set. Danil Kukovitskiy will play a crucial part to the Dolphins game, leading the team with 28 blocks and is second, behind Palencia, with 64 kills. Khaleeq Baum shines as he gets in his groove with 22 kills and five blocks. Adil El Haddad looks to set up his teammates with 216 assists which is three times as much from last season (69 assists), along with Brandon Lei who is second on the team with 24 assists. Ronald Tisbe, Zebin Guo, and Palencia trio combines for 200-plus digs, with Tisbe leading the way with 84 digs.
Players To Watch (RC): Edwin Hernandez and Juan DeJesus have been killing machines this 2017 season. Hernandez leads the Bloodhounds pack with 138 kills and DeJesus is not too far behind with 129 kills in 22 matches. The Bloodhounds has 6 of its players in triple-digits in total attacks, where Hernandez is on top with 386 total attacks. Steven Alvarado is first on the team with 489 assists and sits 50th in the nation with an average of 6.99 assists per set. Alexander Santana and Hernandez combine for 59 blocks, with Santana having 31 of them. Francisco Miranda (140 digs) and DeJesus (108 digs) will play a dominant defensive role against the Dolphins offense.
News & Notes: Both teams are looking to get back in the winners bracket as the Dolphins fell to Ramapo College 0-3 on Monday and Bloodhounds are on a five-match losing streak. The Dolphins will look to defend their home court as they’re 1-3 at home and the Bloodhounds are 5-6 on the road. John Jay is undefeated against Staten Island since 2015, toppling the Dolphins 1-3 at the Sports & Recreation Center on February 17, 2015. Both teams are ranked in Aces per set. The Dolphins are 20th with 86 aces total, averaging 1.76 aces per set. The Bloodhounds are 11th in the nation with a total of 160 aces, averaging 2.22 aces per set. Staten Island will look to present stellar defense to notch their first ever win against John Jay.