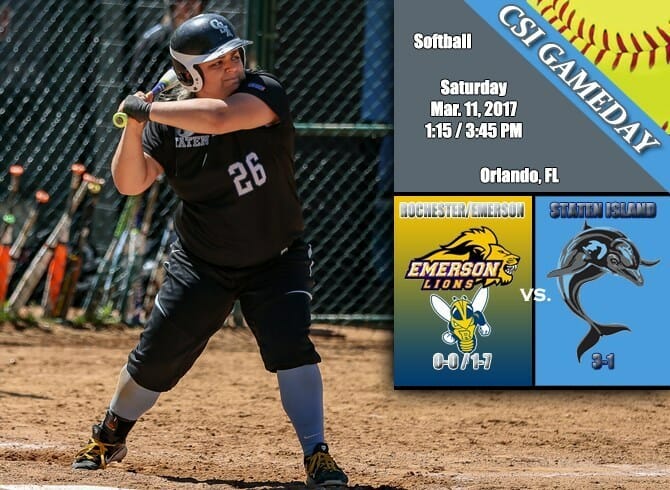 The College of Staten Island softball team returns to the field of play today after a day off. The Dolphins come into today’s doubleheader on a two-game winning streak, and will look to extend that to five today with a sweep. The Dolphins will open the day against Rochester at 1:15 pm followed by Emerson at 3:45 pm at the ESPN Wide World of Sports Complex.

CSI vs ROCHESTER / EMERSON AT-A-GLANCE
Matchup: CSI (3-1 Overall) vs. Rochester (0-0 Overall) Emerson (1-7 Overall)
Where: Citrus Games – ESPN Wide World of Sports Complex, Orlando, FL
First Pitch: 1:15 // 3:45 PM
Live Stats: www.sidearmstats.com/csi/softball
Players To Watch (CSI): Vanessa Jioia is coming off of a game against Thiel where she hit 2-for-4 with the lone RBI in the game in which they won 2-1. Jioia will look to get her bat going once again today against Rochester. Antoinette Galbo had an outstanding game in the field, making spectacular grab after spectacular grab to keep hard hit balls from going into the outfield. In the circle, Alison Meagher will look to pick up her second win of the season today while keeping her ERA at 1 or lower.
Players To Watch (EC): The Lions are led by Jacquline DeFusco with 15 hits and a pair of RBIs, both of which lead her squad. In the circle, Kodie Cash is 1-2 on the year with a 4.32 ERA, the best on her team. Cash has tallied five strikeouts this through six games and will hope to improve upon that mark here this afternoon.
Players to watch (RU): This will be the first game for the Yellowjackets this season and will be led by Rachel Pletz who was the lead scorer for her team. Pletz hit three home runs and tallied 23 RBIs. Elizabeth Bourne led the team from the circle last season with a 6-1 record and a team-low 2.12 ERA.
News & Notes: The Dolphins have been playing good softball in Florida and will need to continue on that pace as they will play Rochester University to start their day, a team that is receiving votes to enter the Top-25, despite playing a game this season. The Dolphins have allowed just five runs through four games this year and have defended the plate well as they have only struck out a total of five times. Kristy Colangelo will return to the starting lineup for the Dolphins today and will hope to make an instant impact.