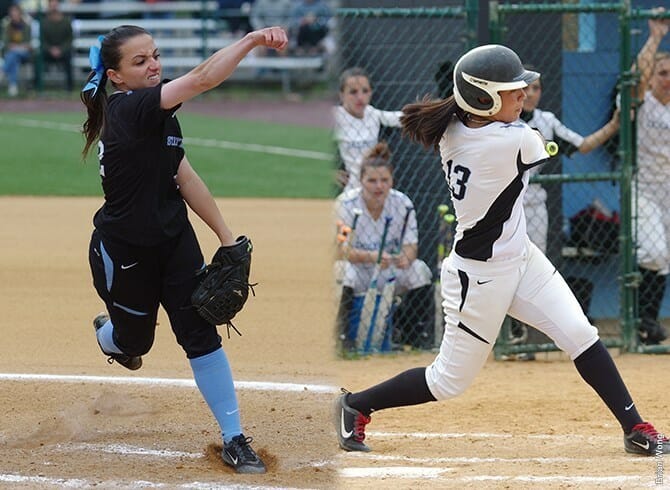 The College of Staten Island softball team celebrated a record-breaking season, and it continues today as the National Fastpitch Coaches Association (NFCA) has announced its All-Region teams and a total of four Dolphins graced the teams.  Jacqueline Cautela and Patricia Riches earned on to the first team, while Antoinette Galbo placed on the second team and Vanessa Jioia earned on to the third-team.  CSI’s four honorees were the only CUNYAC honorees.

Senior Cautela earned on to the team for her work in the circle, where she donned a 15-3 record with a 0.98 ERA.  She fanned a team high 82 batters in 121.0 innings, and was tops on the team in opponent batting average of .175.  She was named the CUNYAC Tournament’s Most Valuable Player, adding to her CUNYAC Pitcher of the Year honor as well.  The senior record holder for wins and strikeouts also provided a powerful punch at the plate, batting .355 with a team best 52 runs scored, 24 bases on balls and three triples, adding 11 doubles, good for second on the team.

Freshman Patricia Riches was the team’s leader with a heavy handed .522 batting average, last ranked sixth nationally in NCAA Division III and the fourth-highest ever in CSI single season history.  The shortstop added team highs in hits with 70, a new CSI record), doubles (14, home runs (6), slugging (.806), while placing second on the team with 19 walks and third with seven stolen bags.  She boasted a .977 glove at the shortstop position, making all 44 starts this season there.

Second team honors went to sophomore Galbo, was last year’s CUNYAC Rookie of the Year and was a first-team CUNYAC All-Star.  Making 44 starts at either third or second base, Galbo boated a .933 glove, and batted a heavy .398, boasting 51 hits with a team-leading 14 sacrifice bunts this season and 12 stolen bases.  Galbo added 9 doubles and came in to score 44 times, good for third on the team.  Together with her 11 walks she boasted an on-base percentage of .462.

Rounding out the All-Region honorees was Jioia who was placed on the third team.  Jioia, a junior, finalized her year at .357, scattering 41 hits with 11 extra-base hits including five home runs.  Jioia tied for second on the squad with 19 walks, lifting her on-base percentage to an even .460.  A tremendous defensive catcher she flashed a .973 glove playing behind the backstop and in the outfield.  She threw out four base-runners in eight attempts looking to advance via the steal.

As a team the Dolphins finished 35-9, winning a fifth-straight CUNYAC Championship.  They took a game at the NCAA Regionals before bowing out.