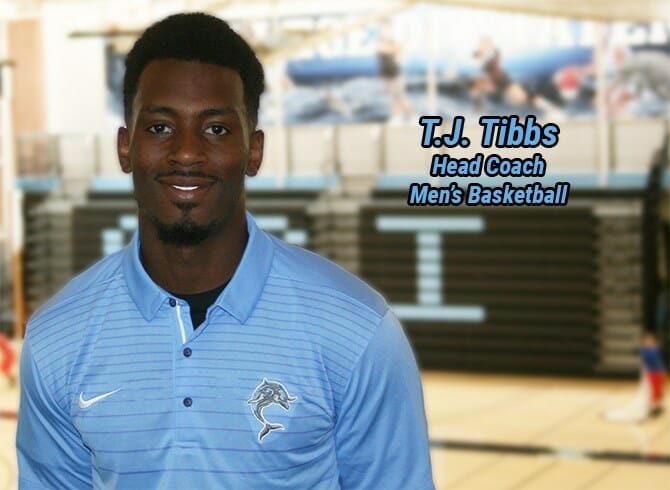 After a feverish search, the College of Staten Island has announced the hire of T.J. Tibbs as its new Head Men’s Basketball Coach in an interim capacity.  Tibbs takes over for long-tenured coach Tony Petosa, who stepped away from the program earlier this month after a 27-year head coaching career.  A former student-athlete and graduate from CSI, Tibbs is the seventh coach in the school’s history and represented a healthy mix of college playing and coaching experience, along with tremendous work with the Staten Island community as an activist and ambassador to the sport.

“T.J. represents everything we were looking for in a head coach,” said Director of Athletics Charles Gomes. “His top priority is the academic and personal success of our student-athletes and at the same time we believe he will set a high expectation for the team’s athletic performance. When you balance that with his ties to the Staten Island basketball community and his experience as a Dolphin student-athlete, we know we made the best choice for the College of Staten Island.”

For Tibbs, the appointment is a humbling one.  The St. Peter’s High School basketball standout caught on late in his career at the College, playing for the Dolphins from 2010-12, leading the team to its farthest NCAA Tournament run in 2011-12, which included a pair of victories at the Sports & Recreation Center.  Tibbs has had three NCAA coaching stops from there, finally landing at a place he cherishes most.

“CSI is literally home to me,” he said.  “The is where I became a man, and where I learned so much about myself.  Although the time I spent here was short, the family atmosphere that surrounds this place stuck with me.  To have an opportunity to follow someone like Tony, and the many great coaches that have coached and mentored here and to continue the rich traditions and be a part of this family really means a lot to me.”

With a philosophy centered on strong academic development, Tibbs will ask his players to serve as leaders both inside the gym and in the neighboring community.  Tibbs states he is dedicated to maintaining active relationships with alumni and supporting the elevation of the program from a locally strong to a regionally and nationally dominant program.  According to the coach, this will be done through instilling championship values and accountability on and off of the court and staying true to this mentality to promote long term growth of every individual that touches the program.

“My job is to prepare our students not just for four years but for the next 40 or 50,” Tibbs said on his principal function as head coach.  “I am in a position of being a mentor and a go-to for individual development and then after that my function is to also coach basketball.  Especially at the college level, it’s important to have good people on your side who are open and honest and my role as a coach fills that role.  To be willing to take on young men and help them become the people that they will be when they leave school is so much more important than basketball, and therefore it’s important to me.  Along the way we hope to continue the rich, winning history of CSI basketball.”

Tibbs certainly has the resume to live up to his own expectations.  The standout started his collegiate career at NCAA Division I Monmouth University for a single season, before transferring to CSI three years later with two years of basketball eligibility remaining.  To say that the point guard and the program flourished upon his entry would be an understatement.  The team posted a 17-11 campaign and was on the doorstep of a CUNYAC title his junior season before a phenomenal senior season saw the team go 26-5 and reach the NCAA Division III Sweet Sixteen.  Tibbs was a Division III All-American and first-team All-Met and CUNYAC All-Star.  He posted 15.8 points per contest to go with 183 assists, then the second-highest mark in CSI single season history.  His 40 points against Rhode Island College in the NCAA’s Round of 32 remain a CSI postseason record.  While playing at the College, Tibbs was also the freshman boy’s coach at Curtis High School.

“I learned a lot as a player,” he noted.  “The best part of that Sweet 16 team and a lot of the memories and the pictures I have on my wall were of the guys on the team who didn’t get a lot of time but who pushed us to be great.  I remember after a tough game getting destroyed in practice the next day by teammates who wanted to make us better.  When we lost our final game none of us wanted to get off of the bus when we got home.  None of it came without hard work, but it made us that much more appreciative of what we accomplished.  You learn that winning becomes a by-product of that hard work and the time you spend in the locker room and in practice wanting the best out of your teammates.”

Tibbs did not waste time entering the college coaching circuit upon graduation.  In August of 2013 he became the Director of Basketball Operations at NCAA Division I New Jersey Institute of Technology, working with coach and mentor Jim Engles, where he served as a liaison for the basketball program with all departments on campus, as well as coordinate budgets and special events for the program.  That position sat side-by-side with Tibbs’ work with the Staten Island Musketeers’ 17U AAU program, which enforced Tibbs’ penchant for working with area youth, furthering not only their basketball interests, but academics and personal growth as well.

“Working at NJIT wasn’t so much about being a part of Division I as it was about having the chance to work with Jim and invigorate myself for what I truly aspired to do.  That year not just enforced what it is I wanted to do but how I wanted to do it.  It helped me grow and I knew that if I ever did come back to Division III, I would be prepared to do it efficiently.  Doing it while being a part of AAU basketball makes you realize that the sport itself and the situations are the same.  It was a chance to give back to the kids I was always involved with and to cut my teeth more as a coach.  The more I put myself into coaching situations, the more prepared I was preparing myself for this day.”

In July of 2014, Tibbs found his way back into the City University of New York Athletic Conference, working with CSI-rivals Baruch College in Manhattan as an assistant coach.  There, Tibbs was responsible for a heavy dose of the Bearcats’ recruiting efforts, while developing game and practice plans and a year-round skill development program for all BC student-athletes.  Tibbs left the Bearcats during the middle of the 2016-17 season, accepting an interim role as Head Coach at the College of Mount Saint Vincent.  Taking over the team in late January, Tibbs inherited a 3-14 side and led the team to a 4-4 record in its final eight games.  The development of “culture musts” is a formula that Tibbs believed helped his progression, and will carry with him to his alma mater.

“I had 24 hours to get our kids to buy in to what I was saying and so we spent a lot of time talking about why they came to the school to learn and play and it enabled us to create a culture of caring and a recognition of what was important for all of us,” he explained.  “That success that we had in a short time is a testament to the student-athletes and the level of support they had for us as coaches and for each other.  Sometimes my standards and expectations are high so it’s important that those concepts are shared with the people you are working with.  Our kids were kind, courteous, and bought into the fundamental approach that what we were doing, we were doing together.”

Tibbs is not shy on his outlook for CSI Basketball.  He wants to help build on the rich tradition the College has been known for, making it a logical landing spot for the area’s best talent, and he hopes to reach outside the local neighborhoods to boost the squad’s roster.  He expects his teams to compete for national prominence and will emphasize the importance of community engagement through outreach and skill and character development programs centered on Staten Island youth.

“On the court the expectations are to compete for a CUNY championship every year, regardless of what our roster looks like and injuries,” Tibbs said.  “The biggest expectation is to have a team that is respectful and to house a program where individuals represent the College, their families, and most of all themselves in the best way possible.  We want our players to carry themselves as men who are personally accountable for their actions and be role models to the entire student-athlete body and the surrounding community.”

An interim hire, the head coaching position at the College will undergo an intensive formal search at the conclusion of the season, but by that time, the dynamic ex-player who is embarking on his first full season as a head coach will have hoped to lay the groundwork for a successful run by the Dolphins’ newest installment.

“Our first job is to take care of those players that are here,” Tibbs said.  “They did a tremendous job for Tony, and it’s tough for them to lose someone like that and so my priority is to make that transition as smooth for them as possible while slowly instilling my standards and goals for the program.  As an alum I think we speak some of the same language and know what it’s like to be a part of this program, and part of that is knowing that no matter who the coach is this team is inherently built to push the standards.  This isn’t my program, it’s our program, and it is so important to share in the process of making it about us and achieving our shared goals.”

“In my four years as Athletic Director, this is the most difficult decision I’ve had to make,” said Gomes. “Searching for a coach this late in the offseason is already challenging, and when you’re presented with the large number of quality candidates who applied it only makes the process more difficult.  At the end of the day we know that T.J. Tibbs is the best fit for our men’s basketball team and I look forward to helping him shape his vision for the program.”

The College of Staten Island men’s basketball season officially begins on October 15 with preseason activity and training followed by the introduction to the season on November 15, on the road against Yeshiva University.  Tibbs will make his home debut with the Dolphins on Wednesday, November 29, against Stevens Institute of Technology, at 7pm.