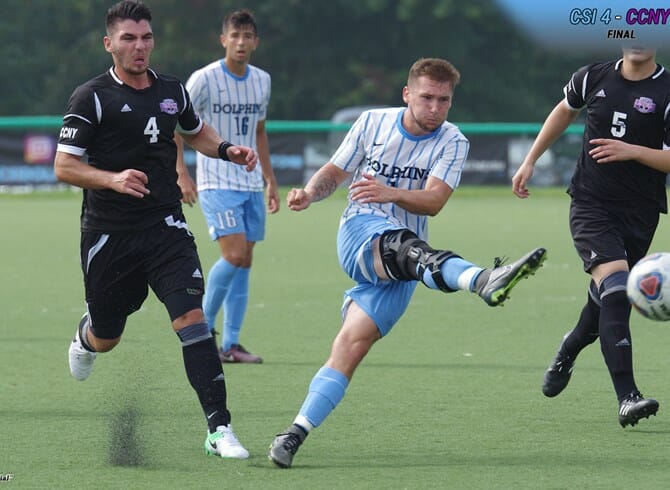 The College of Staten Island men’s soccer team hosted City College of New York this morning at the CSI Soccer Complex for their first CUNYAC action of the season. The Dolphins kept their streak alive with a 4-0 statement win to improve to 5-1 overall and 1-0 in the CUNYAC.

The Dolphins opened the game with a pair of offside calls as they were anxious going forward.  That high pressure would eventually lead to a goal in the 17th minute.  Vasyl Fedortsi was on the receiving end of a curling pass across the goal mouth from Joel Morales.  Fedortsi was able to half volley the ball into the opposite side of the goal for his first goal of the season as well as the first goal of the game.

Staten Island was able to double their lead just one minute later as Philip Lefkowitz launched a low hard shot that found its way into the back of the net for his second goal of the year.  The Dolphins’ back four looked stout this morning as they held the Beavers to just four shots in the first half. Before the first half would come to a close however, Adrian Cosovic would find himself on the scoresheet.  Cosovic would line up a free kick from 25-yards out and cannon a low shot into the net for the third goal of the game.

The Beavers wouldn’t have a quality chance on goal until the 71st minute when they would knock one off of the post which would roll across the goal mouth.  The Dolphins would get lucky as it would be cleared away from danger to keep the zero on the scoreboard for the Beavers.

CSI would cap off a high scoring day when Bryant Navarro received a pass from Christopher Lopez and put it in the back of the net for his team-high fourth goal of the season.

The Dolphins will return to action on Monday, September 18 when they travel to Phoenixville, PA to take on Valley Forge at 4:00 pm.